If I haven’t had my medieval fix for a while, my ‘LOW CASTLES’ warning light comes on, so I have to get to one – sharpish. Yesterday, I was happily refuelled with a trip to the south coast, for a wander around Portchester Castle in its imposing setting overlooking Portsmouth harbour. It’s an interesting castle, full of stories of intrigue, royal dramas and 100 years of wars with France. 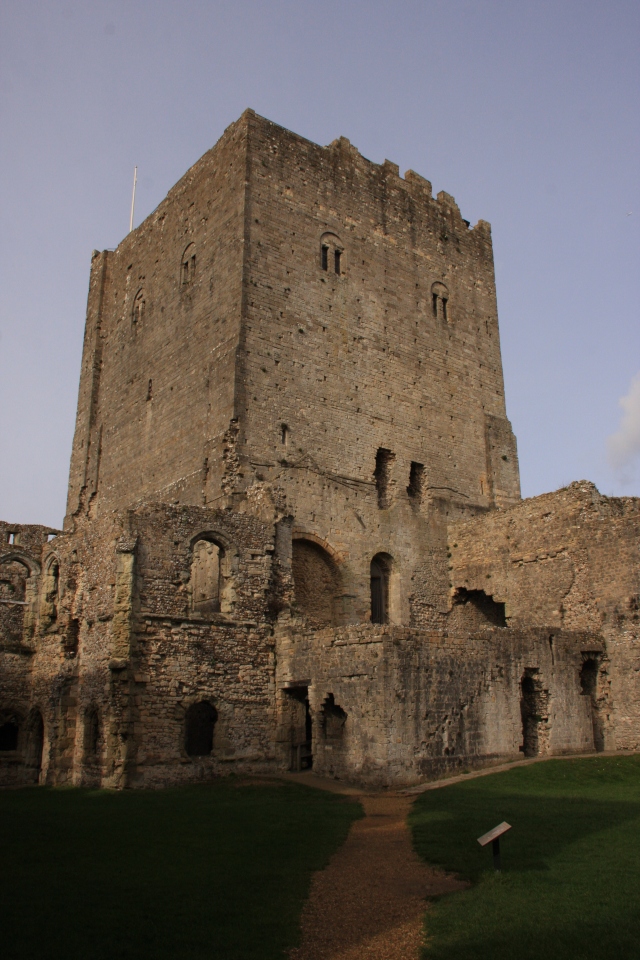 The first thing to note about Portchester is that it’s nestling in even older history. It was built in the north-west corner of a 9-acre Roman fort, the impressive walls of which, at 10ft thick and 20ft high with regular D-shaped towers – or bastions – form some of the most complete and best preserved Roman walls in northern Europe. Medieval castle builders often recycled Roman buildings and masonry, but to set up shop in one corner of a whole site is less common. But this was the perfect location for a defensive stronghold – in Roman times it successfully kept barbarian pirates at bay, and in the Middle Ages the emergent castle was an ideal defender of the Realm, and the place to be if you were mustering troops to invade France.

The castle was most likely established after the Norman Conquest of 1066 by one William Maudit, a powerful ally of William the Conqueror, but in 12th Century the castle was taken over by Henry II as a royal stronghold. It then remained in the hands of monarchs until 17th Century when it was bought by a local landowner, Sir William Uvedale, whose family have owned it ever since. But back in the Middle Ages, Portchester witnessed some pretty important events. 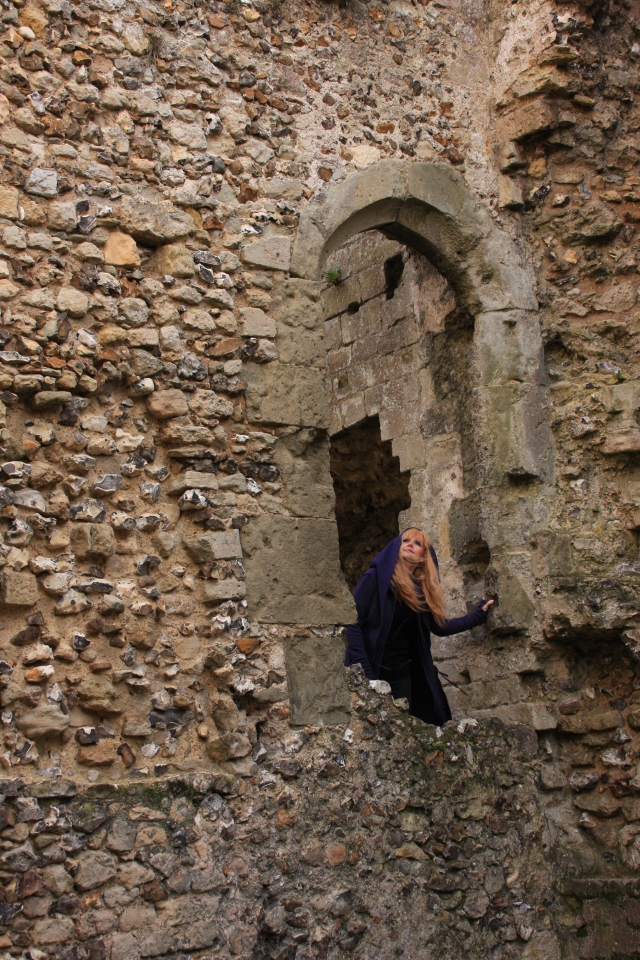 Bad King John (r. 1199-1216) was a regular visitor to the castle for both recreation and military purposes. It was here in 1204 that he received the devastating news that he’d lost the Duchy of Normandy to the king of France. John was so unpopular and such a poor general that his two subsequent missions to recover his French lands failed miserably. In 1205 he mustered a large army at Portchester, conscripting one knight in every ten throughout the country. But although he and his army were ready for war, his barons weren’t. Many of them had lands in France as well as England, and John had made a lot of enemies among them. As he faced one prominent noble who had betrayed him by making an agreement with the King of France, he is reported to have cried out: “By God, not one of my Barons is with me!”

On a more victorious note, during the Hundred Years War, Portchester was used as an embarkation point for two pivotal battles in our history – Crecy and Agincourt. Thanks to a Frenchman named Harcourt who betrayed his country, Edward III won at Crecy in 1346, and Henry V left the castle with his army in 1415 for possibly the most famous battle of the whole Middle Ages – Agincourt. However, this was not before a drama unfolded which could have seen him murdered. Henry’s father, Henry IV had seized the throne from his cousin Richard II and starved him to death, and many people didn’t believe that Henry V had a right to rule. So his cousin, Richard, Earl of Cambridge plotted with two nobles to have him killed while he was at Portchester, and then put another family member Edmund, Earl of March on the throne. However, they made the fatal mistake of telling Edmund their plans. Edmund can’t have fancied the job because he told Henry about the plot and the conspirators were quickly tried and executed, leaving Henry V free to set sail and secure his historic victory at Agincourt. 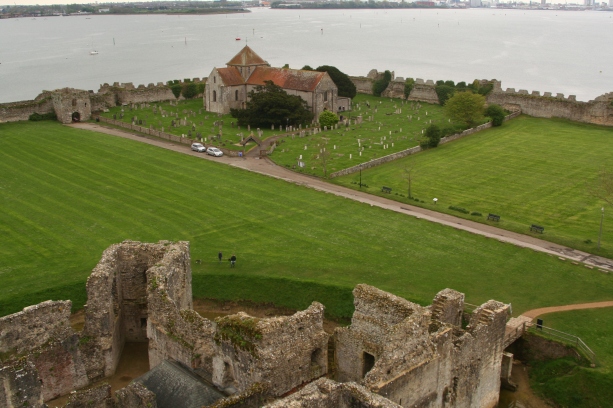 The view from the top of the keep, showing the castle within the
Roman Fort and the sea beyond

The 12th Century keep (or Great Tower – as we’re all supposed to call them now) at Portchester is one of the most impressive and intact in the country. It’s pretty big, and you can wander through three floors of history before reaching the roof, where there are commanding views of the surrounding seascape and the Roman Fort below. My favourite floor is the first, which houses the Great Hall, the hub of activity for castle life which would have been richly decorated and furnished in its day, and the similarly grand Great Chamber, which was most likely the withdrawing room, or bedroom for the owner.

On the upper floors there’s an exhibition relating the story of a later use for the castle as a holding place for prisoners of war during the major conflicts of 18th Century. The beams at ceiling height still hold the long nails which may well have supported hammocks for the prisoners to sleep in, and wall paintings survive from when they used it as a theatre in the early 19th Century.

Outside the keep within the castle complex are also the remains of a small, but grand palace built by Richard II in 1396 before he was deposed by Henry IV, and they are a joy to wander around. Although in ruins today, a little imagination will give you an insight into the former grandeur of the place, with its ornate entrance and windows, the lingering room layout, doorways on the upper floors and fireplaces that kept the king and his entourage warm and comfortable. 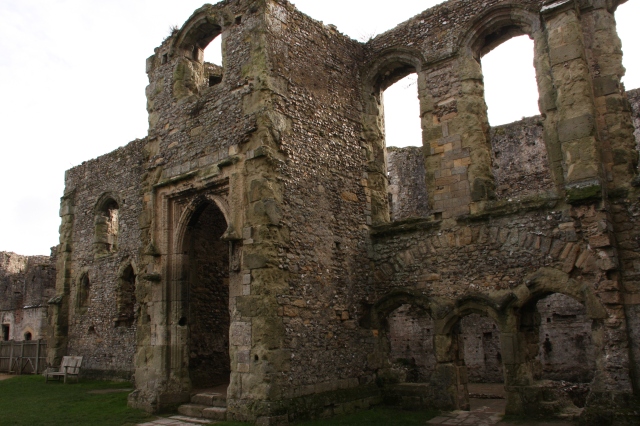 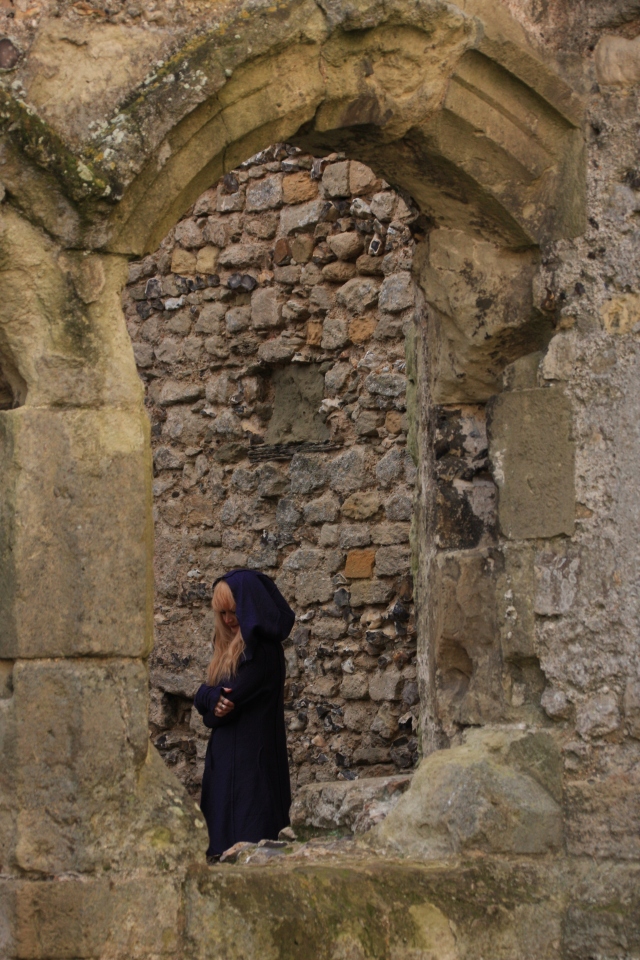 Looking through a window into the palace

Another great feature of the castle is its tidal moat, which was empty on arrival and rising when we left. How cool is that? 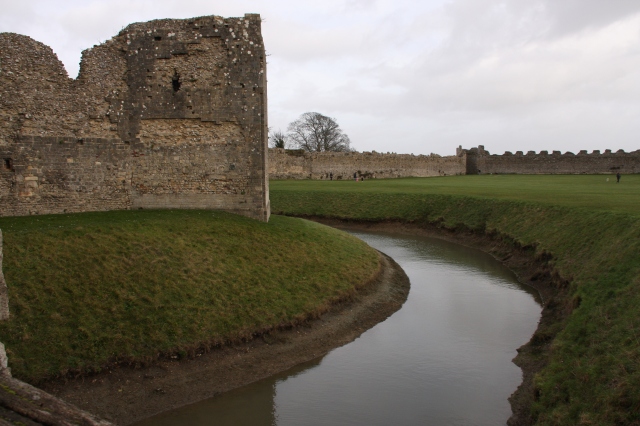 The moat is coming in! 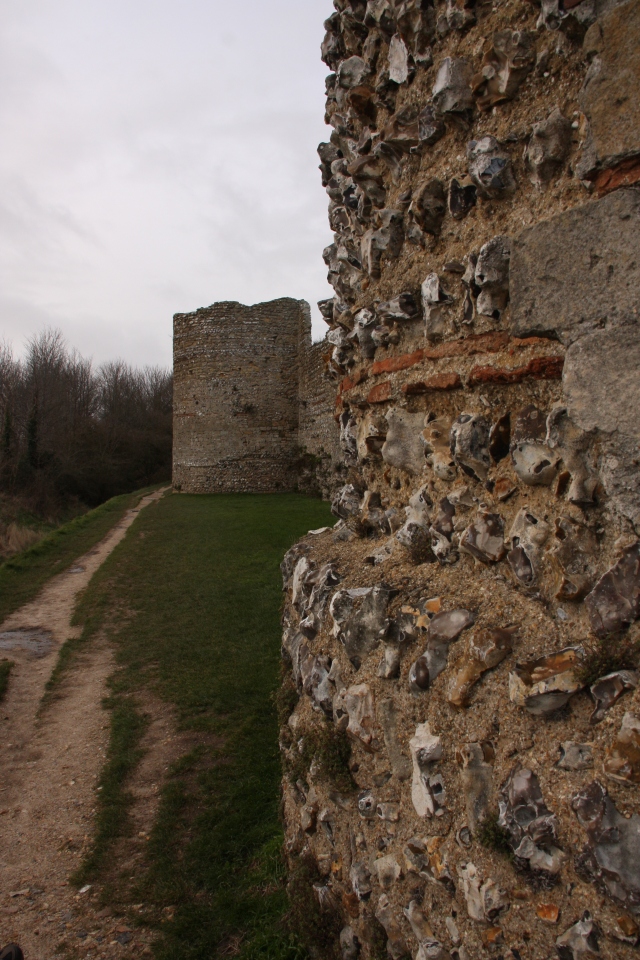 The Roman walls with their bastions – the view from the outside

Portchester has 1,700 years of history under its belt, with all the stories and dramas that played out among its walls. It’s all there, and you can take a lovely wander round the outside by the sea as well, looking across the water to Portsmouth’s Spinaker tower and beyond. And with that, my LOW CASTLES warning light went out. But I doubt it’ll be for long…