A Dynasty Born of a Demon

The Plantagenets were the longest-ruling dynasty in British history. From the founding member, Henry II, who took the throne in 1154 through to the death of Richard III at the Battle of Bosworth in 1485, England witnessed this extraordinary family’s turbulent reign. Generations of shifting loyalties and infighting saw fathers falling out with sons, brothers turning on brothers and cousins plotting to usurp the crown in a protracted and very real Game of Thrones. But according to legend, none of this would be surprising, as the dynasty is said to have been spawned by a powerful French count, and a demon.

The story goes that back in the mists of early medieval France, the Count of Anjou, Geoffrey Greymantle fell in love with a mysterious woman of unknown origin. Her beguiling beauty drew the Count into a precipitous marriage, and the couple had three children. But in an age when life revolved around religion and regular worship, the Count became concerned that his wife attended mass only rarely, and even then she was restless in church and always left before the crucial Holy Communion took place. One day, the Count ordered his soldiers to restrain her, but she broke free, screaming wildly, and flew out of a window. The Countess was never seen again.

It was her line that gave rise to the Plantagenet dynasty. Fast forward a few generations to the early 12th Century, and enter Geoffrey ‘the Fair’, son of Faulk V, Count of Anjou. Said to be a tall, handsome and strong young man, it was Geoffrey that acquired the enduring name of Plantagenet, but not in any official way; instead it was a nickname that caught on because he often adorned his hat with a sprig of yellow flowers from the Broom plant, the Latin for which is planta genista. 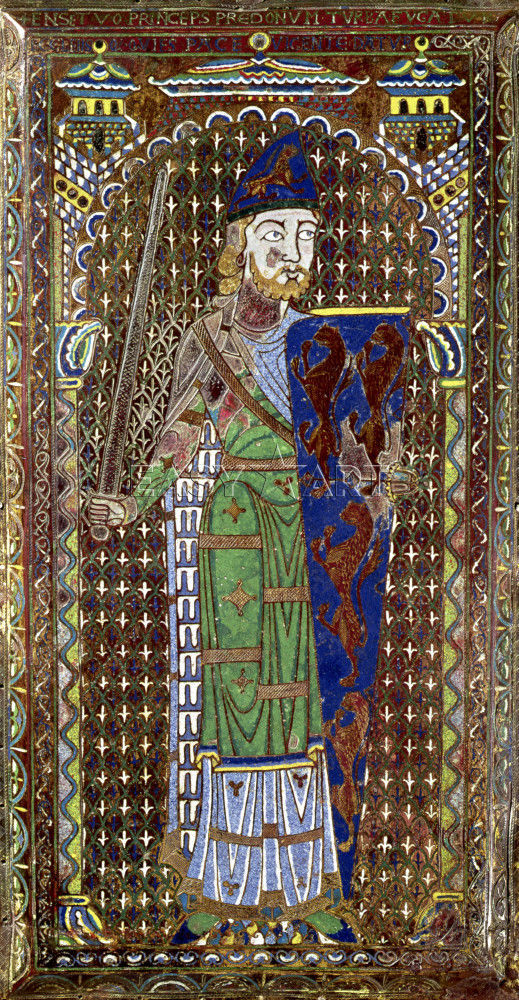 The only surviving image of Geoffrey ‘the Fair’, the first family member to gain the nickname Plantagenet

In 1128, at the age of 15, Geoffrey Plantagenet was married off by his father to the Empress Matilda, widowed daughter and heiress to the English Norman king Henry I. Although the couple couldn’t stand each other, they were eventually forced into reconciliation and told to get on with producing an heir. The resultant eldest son was to become the first Plantagenet king of England, Henry II. No-one in the family actually used the name, however, until the 1460’s, when Richard, Duke of York, father to Richard III, took Plantagenet as a surname to emphasise York’s superiority over the Lancastrians in the claim for the English throne.

Over the centuries, their story of demonic ancestry provided an explanation for the legendary ferocious tempers that ran through the Plantagenet line, as well as the almost supernatural success that some of them enjoyed on the battlefield.

Of course, the reality of the dynasty’s origins is most likely nowhere near as exciting. Geoffrey Greymantle (c.938ꟷ987) was actually married to a French noblewoman called Adele of Meaux, who we don’t know a lot about. She died in 982, but one of their sons, known as Faulk ‘the Black’, was renowned for his violent temper and savagery, and this added weight to the story of a dynasty descended from the Devil. Seen as a dangerous and ruthless family, many medieval people were convinced they had evil blood running through their veins. Some Plantagenet kings were even proud of their fiendish ancestor, as Richard I, the Lionheart, once proudly declared: “From the Devil we came, and to the Devil we shall go!”. After all, in an age of superstition and religious polarity, this could have been a useful device in the face of an enemy. Who would go into battle against a demon’s progeny without thinking about it first?

And Richard III, the last of the Plantagenet Kings

Either way, the story of the demon Countess of Anjou and the formidable bloodline she spawned  saw the Plantagenet dynasty rule England for over 300 years, filling the Middle Ages with some of the best stories and characters our history has to offer, and some of our most notable – and notorious – kings.

59 thoughts on “A Dynasty Born of a Demon”