Playing with Nature, Politics and Spirits at Rhuddlan Castle

Our walk today was a short one, mercifully as it was horribly hot, before we were able to enjoy the cool shade of the castle. We picked up where we left off yesterday at the mouth of the River Clwyd and, just as Edward’s army marching from Flint reached its destination at Rhuddlan, so did we. And it was at this ancient strategic river crossing, having defeated Llywelyn, that the king chose to build another new castle.

Cooling off in the castle walls!

There was already a castle at Rhuddlan. It was a wooden Norman motte and bailey fortification, complete with a small town, built in 1073 on William the Conqueror’s orders to protect the crucial ford across the Clwyd. It was clearly important because it had its own mint until 1272, and it was the chief Norman town in the district and an ideal base for expansion into Wales. The old castle, whose mound and earthworks still survive, is most likely where Edward stayed and laid out his plans for a new fortress, a permanent statement in stone of his victory over the Welsh prince, of his authority and his unquestionable power.

Work began in September 1277 under a master mason called Master Bertram, but when he retired less than a year later Edward drafted in his future top dog, Master James of St George, who worked on the new castle for a while until he moved on to complete his first grand project at Flint. Built on a concentric design of defences, the outer walls, which are barely there now, were fairly low, allowing the castle’s archers and crossbowmen to fire over the heads of the outer garrison without killing them. Three sides of the castle were surrounded by a dry moat with the fourth leading down to the serpentine river Clwyd, and it was this aspect that afforded Rhuddlan it’s most impressive feat of extreme engineering. Edward changed the course of the river.

Ever conscious of his castles being accessible to ships, Edward realised that this perfect strategic inland location didn’t allow for vital supplies to reach him as it stood. But not letting a little thing like nature get in his way, he recruited a mass of diggers, or ‘ditchers’ to straighten and deepen a two-mile stretch of the river. The contemporary records tell us that in the summer of 1277, there were 968 men beavering away armed only with picks and shovels working to change the course of the Clwyd. The result meant that Edward’s cargo ships bringing in building materials, food, weapons and luxuries could sail from the mouth of the river at high tide and offload in a specially constructed sloping dock alongside the southern castle walls. 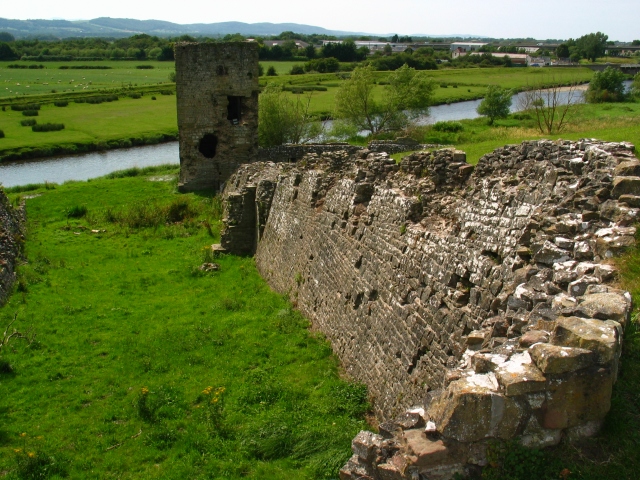 The rear of the West gatehouse from the inner ward 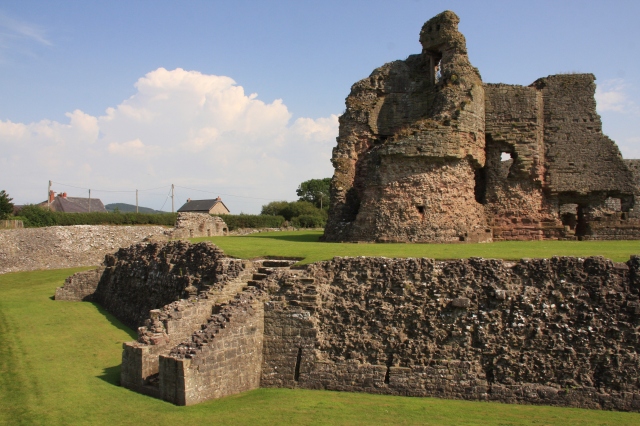 The dry moat with the North tower beyond

As work progressed on the new castle, it was here at Rhuddlan in November 1277 that the king finally received the crushed Llywelyn’s submission and homage. In another significant political act, it was from Rhuddlan that Edward later issued the ‘Statute of Wales’, which established a system of government in the country which remained unchanged until the Act of Union in 1536.

On a less earthly note, Rhuddlan Castle even has its own medieval ghosts. One is the constantly sobbing spirit of Erilda, the unwilling bride of an arranged political marriage. She tried everything to escape her fate, without success, until her wedding day when vows were to be exchanged in the chapel. In the nick of time she was ‘rescued’ by a mysterious knight in shining armour with a red plume in his helm, who murdered the groom and her father and then carried her off, only to be subsequently revealed as a demon. Erilda was never seen alive again, but she is bound to the place of the tragedy, her soul unable to find peace, and she’s been seen running through the inner ward, her sobs reverberating around the ragged ramparts. Another wraith is said to be that of an archer drawing his phantom bow. Perhaps he stood too high up on those outer walls one day…

Is that an archer out there?

And as for those walls, they are a joy to wander around. The most striking physical feature of the castle itself has to be its magnificent twin-towered West gatehouse, which packs a punch with its sheer size, and it’s easy to imagine the impact this and the rest of the castle must have had on the local population when it first went up. You can’t help but feel drawn to the place and be impressed by its remains, left this way by the evil machinations of the parliamentarians after the Civil War when it was deliberately ruined in 1648.

The state they left the castle in then is how it still appears today. Oliver Cromwell and his destructive cohorts may have rendered Rhuddlan defensively useless, but one thing they couldn’t take away from it is its lingering beauty and imposing presence in the landscape. Standing proud over the river that was remodelled to fit it, Edward’s second new castle in his ‘Iron Ring’ continues to make an undeniable impact on everyone who passes its way.

But tomorrow we’re on the move again, because although he didn’t know it at the time, Edward’s building work was far from finished…

42 thoughts on “Playing with Nature, Politics and Spirits at Rhuddlan Castle”