The Turbulent History of Harlech Castle and Episode Nine

Having flown over Harlech Castle yesterday, it was wonderful to follow up with a ground visit today. And on the ground it’s no less imposing than it is from the air, because the unique selling point of this last of Edward’s post-1282 castles is its dramatic setting. It sits high up on a rocky promontory, gazing out to the dunes below and the now distant sea, with a backdrop of stunning Snowdonian mountains. But its commanding position and formidable defences didn’t stop attacking forces having a go at besieging it throughout the Middle Ages, and later events even inspired a famous national song. 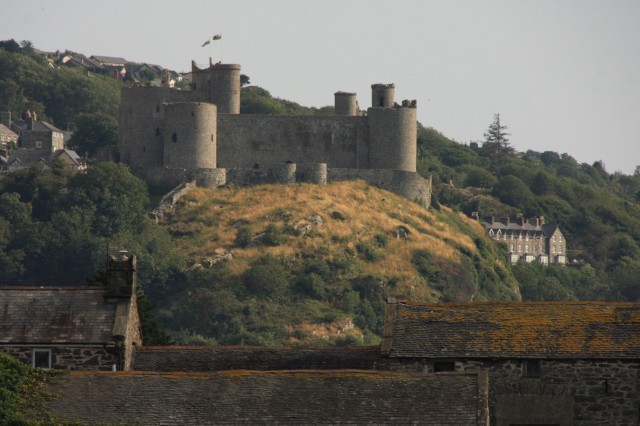 The view from the wall walk

Like the others, Harlech Castle went up astoundingly quickly for the time, completed in just seven years under the direction of Master James of St George. Constructed to a compact design of walls within walls to perfectly fit its restricted space, it was this fortress that was to be the reward bestowed on Edward’s master mason for all his hard work. The king made Master James constable in 1290, and the chief mason  and his wife lived in the comfortable accommodation of the spectacular gatehouse for several years until his retirement.

The back of the gatehouse and the inner ward

To ensure supplies could reach the castle during a siege, Master James built a defended way from the sea, a long path and flight of 108 steps on the western side leading down to the water. But a weak point in the defences was exposed during the rebellion led by Madog ap Llywelyn in 1294-5 when the castle was cut off by land. Although the defenders held out owing to the well guarded path to the supplying ships, the rock to the north had relied too heavily on natural features, so this was subsequently enclosed with a wall of lime and stone, while the water tower got a new gate to protect it even further. But Harlech was to see further conflict later in the Middle Ages, and it took centre stage in a pivotal drama during the Wars of the Roses. 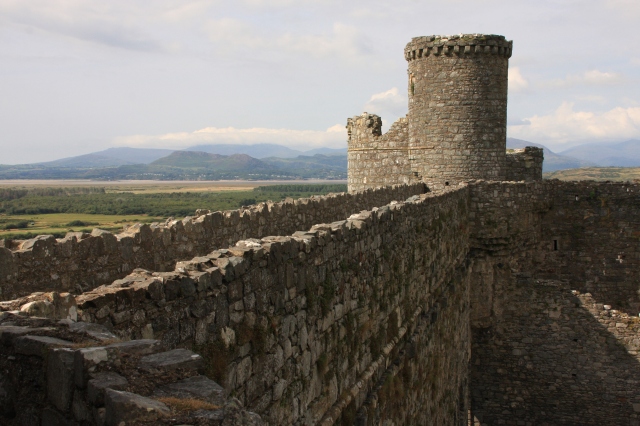 Looking across the battlements to the magnificent mountainous backdrop

Whether age or complacency had weakened the castle’s ability to defend itself, or whether the Welsh had become more adept at rising up against English rule, it was in 1404 that Harlech was put to the ultimate test by a new insurgency led by the charismatic Owain Glyndŵr. The mighty fortress put up a good fight, despite being armed only with minimal military equipment at the time. An inventory taken the previous year lists just three shields, eight helmets, six lances (four of which were missing tips), ten pairs of gloves, four guns and some iron and lead. After a long siege, Harlech finally fell to the Welsh and according to tradition, it was here that Owain Glyndŵr, in the presence of his Scottish, French and Spanish allies, was formally crowned Prince of Wales. After this, Harlech became his royal court and his family home, and he held a parliament there in 1405. However, his fortunes weren’t to last, and in 1408 the English were back.

Walking around the battlements, and trying to keep the vertigo under control!

Harlech came under siege again, this time from King Henry IV’s forces, and leading them was Henry of Monmouth, the future Henry V of Agincourt fame, and as the English Prince of Wales, he wanted his castle back. Well equipped for the mission, one of the cannons used against the defending Welsh was known as the king’s daughter and there are references to it bursting during one of the attacks. It’s thought that the heap of stone cannon balls still to be found on the floor of the gatehouse was delivered courtesy of this particular bombardment. By February 1409, the castle had been successfully reclaimed by the English, but sixty years later Harlech took to history’s stage again during the Wars of the Roses. And this time the story was laid down for posterity in song. 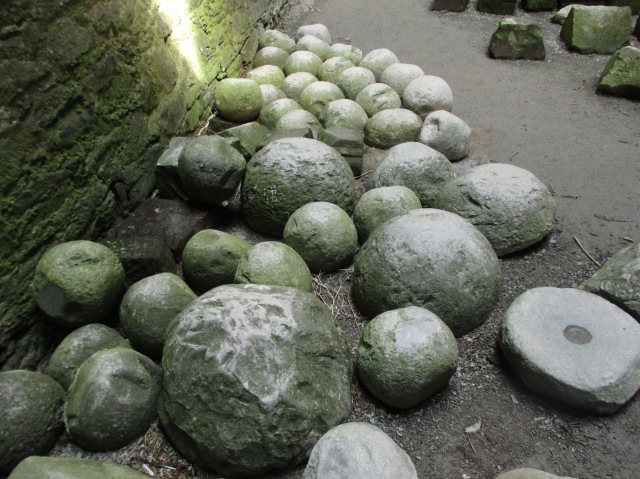 The culprit cannon balls lingering in the gatehouse

This time, the castle was caught in a tug of war between two sides of the same English royal family, the Yorkists and the Lancastrians. In the summer of 1460, Margaret of Angou, wife to the mentally incapacitated Lancastrian king Henry VI, took refuge at the castle. As a major protagonist in the fight, Margaret led armies and recruited French support on behalf of her husband. Harlech became the last Lancastrian stronghold in Wales, but in 1468 the Yorkist king Edward IV ordered its recapture.

The Yorkist Lord William Herbert of Raglan raised a force of over 7000 men (some estimates say 10,000), and marched on Harlech in July to begin a fierce attack. The siege was described in detail by the Welsh poet, Hywel Dafi, who described Lancastrian supporters inside being “shattered by the sound of guns” with “seven thousand men shooting in every port, their bows made from every yew tree”. Resistance to this formidable strike became futile, and on 14th August, after less than a month, the castle was surrendered with only 50 prisoners taken. It was this siege that is said to have inspired the legendary song Men of Harlech.

The view from the battlements out to sea – it was a lot nearer back then. I can feel a song coming on…

Despite its war wounds and the pile of spent ammunition, Harlech looks remarkably good for its turbulent past, being fought over and occupied by both sides over centuries of conflict. But now, in its peaceful state it was a pleasure to wander around the walls, admire the framing mountains and gaze out from the battlements towards the sea that once lapped at the crags beneath its feet. But now it’s time to pick up on Edward’s story after we left him at Conwy, and enter the final chapter of these epic and fateful Welsh wars…

Episode 8: Fixing the Weak Link in the ‘Iron Ring’

After the rebellion fizzled out the king emerged from his castle sanctuary at Conwy, victorious once again, and Madog ap Llywelyn was taken to be imprisoned in the Tower of London, although surprisingly not executed. But the other ringleaders and participants weren’t so lucky. Many were put to death, and the local communities paid heavily for their disobedience, none more so than the people of Llanfaes on the eastern edge of the island of Anglesey. As the most prosperous native community in Wales, this had been one of the major centres of the revolt. Anglesey had proved to be a weak point in the King’s ring of iron, so after this latest rebellion, it was time to build one more castle – on top of Llanfaes itself…