One of the best parts of this Quest is, of course, when I get to taste a wide range of amazing meads. I’ve got all kinds lined up to try, from traditional honey wines to more exotic flavours, and even a sparkling variety. With a choice of sweet, dry and somewhere-in-the-middle versions, there is, it seems, a mead for everyone, and anyone who thinks they don’t like it is in for a surprise. So prepare for a journey into the flavours of past and present, and let’s see what wonders we discover…

A Selection of English Heritage Meads, all ready to try out. This is going to be fun…

Where better to start, I thought, than to try out a selection sold at many of the castles I love to visit. Along with the success of TV shows like Game of Thrones, English Heritage is often credited with sparking the drink’s revival in recent years. As the biggest retailer of mead in the UK, they claim to sell a bottle either from their shops or online to a global market every 10 minutes. I picked four of their meads to sample, and they were all winners. First up, their Traditional version, which I was encouraged to see bears more than a little resemblance to a certain residential friend of ours:

This really has the feel of autumn in a bottle. With its rich, deep golden-brown hues and a sweet, luscious whack of honey, it really is a glass of cheer for the darker months. But it delivers on the history too, as this is your archetypal ‘nectar of the gods’, in which you can taste your way to the Viking raids, the castle revelry and the peasants’ tavern. And it does actually taste medieval. Like most meads, as well as the honey, there’s usually a characteristic musty flavour to this ancient drink, in a way I can only describe as reminiscent of a medieval bookshelf. But I mean that in a good way. It’s more prominent in some than others, but in any case it’s unique, distinctive and very evocative. So for a starting point, this is a good one – a great dessert wine, or a tipple to pour over ice or use in one of the cocktails I’m going to knock up. I can’t help wondering if our own Sticky Rogers will end up like his Traditional cousin, if looks are anything to go by. But only time will tell…

Spicing it up… Heritage, or Celtic Mead

Hot on the heels of the Traditional comes the Heritage, or Celtic Mead, depending on which English Heritage Property you’re visiting at the time. This was a surprise, but a very pleasant one, not quite as sweet as the Traditional and with a pleasing kick of warming spices. It’s like a golden spicy fruit wine, and I can see it pairing nicely with a strong cheeseboard or a good curry. It’s gorgeous as a treat on its own, and I found it  rather moreish. A warning here though, as at 14.5% Volume, this and the Traditional are the most alcoholic of the four varieties we tasted, and you really don’t notice it merrily slipping down. No wonder Vortigern got into such a pickle. Still, someone’s got to do all this research, and I’ll manage somehow. So after a thorough examination, it was a big thumbs up for the Heritage Mead! 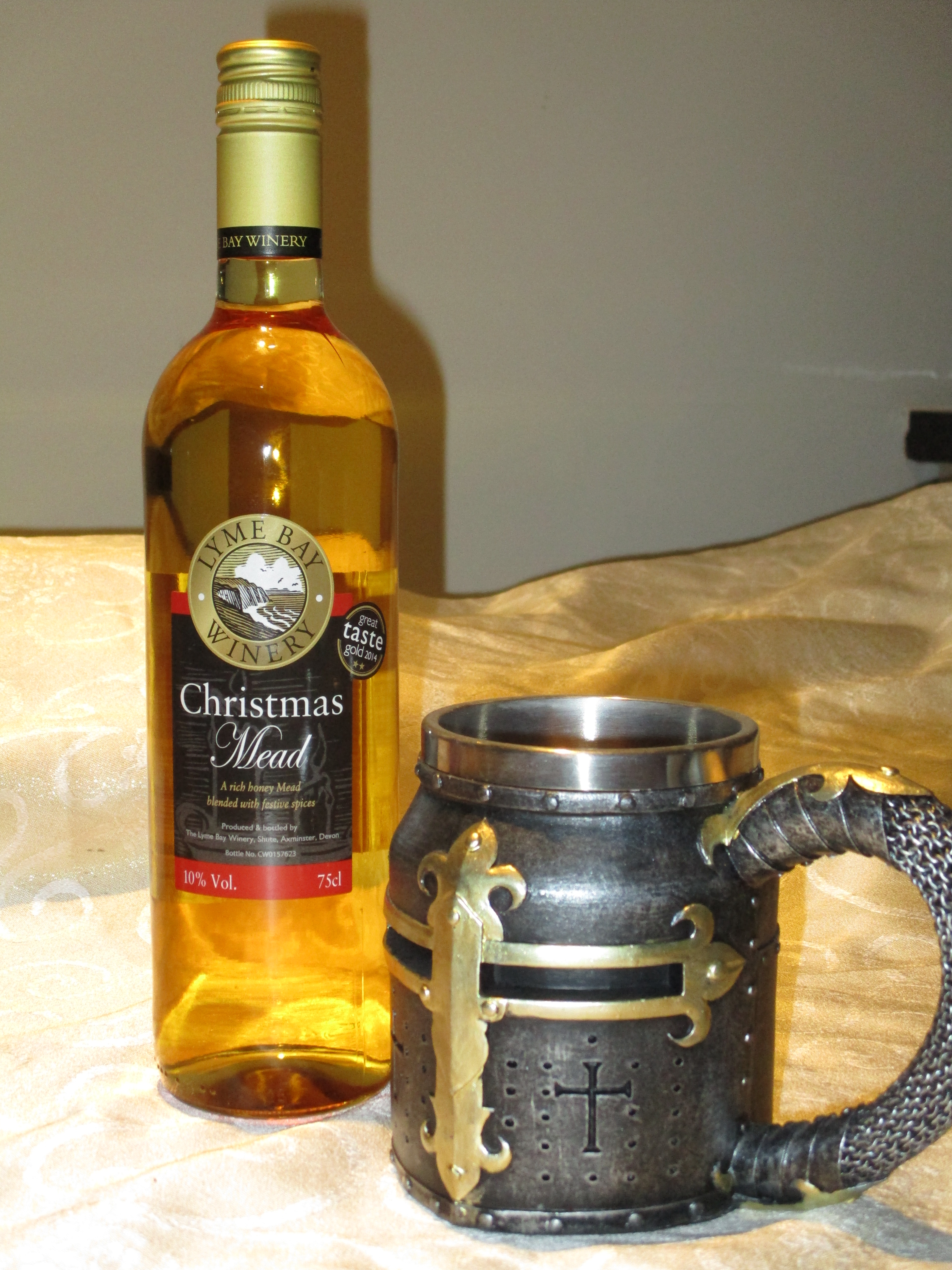 Next on the list was a very special Christmas Mead. Winner of a ‘Great Taste’ Gold award in 2014, this is a particularly festive blend of honey wine and Christmas spices that would bring a big dose of winter cheer to any gathering, big or small. Similar to the Heritage in colour, just imagine a rich, golden yuletide drink with cinnamon, nutmeg and cloves, a sprinkling of citrus and, of course, the honey, and you have the perfect accompaniment to any Christmas pudding. My friends at Kenilworth Castle, where my bottle came from, also recommend mulling it, so we had a go. I put a few glasses into a saucepan and heated it gently with a slice of orange, and the result instantly swept me away into the thick of December with frosted pines and dancing flames in the hearth. I can honestly say, for me this is a true goblet of comfort and joy. I’ll definitely be stocking up on this one…

Turning up the heat with Chilli Mead

Finally, we tried one of the many meads with a modern twist. Not an obvious candidate for the favourites list, but Chilli Mead turned out to be a very pleasant discovery. The most deeply coloured of the range, this looks more like a glass of ale with its deep reddish glow, and I did wonder how the addition of chilli would work. But I needn’t have worried because you get all you expect from a delicious and rich mead, but with added extras. Not quite as sweet as the Traditional version, this is mead with afterburn. The chilli hits you as the drink goes down, and as long as you’re not scared of a little heat, this is really worth a go if you’re up for something a bit different.

And a Sticky Rogers Update:

And what of our own brew? Well, Sticky Rogers has actually been slowly going clear, with a sediment gradually building at the bottom of the demijohn. And as you’ve seen, he has a lovely deep amber colour making him really look the part. But as I want to preserve a little of his sweetness for the end result, it’s nearly time to stop the fermentation…

All this tasting and brewing has made me feel quite a connection to the ancient libation, and I have an urge to wax lyrical about the drink I’m discovering so much about. So I’ll draw on a sixth-century poem, The Gododdin of Aneurin, and a brief look at the role that mead played in preparations for war. For this was the drink that primed many an ancient people for battle, perhaps giving them Dutch courage to face the swords, spears and arrows to come. The poem describes the British struggle with the Teutonic incomers, and how it was mead that set them up for the fight:

The warriors marched to Cattraeth, full of words;

Bright mead gave them pleasure, their bliss was their bane.
The warriors marched to  Cattraeth, full of mead;
Drunken, but firm in array; great the shame.

Just fate we deplore.
For the sweetness of mead,
In the day of our need,

Is our bitterness, blunts all our arms for the strife;
Is a friend to the lip and a foe to the life.
I drank the Mordei’s wine and mead,
I drank, and now for that I bleed.

I don’t know about fighting battles, but my first foray into proper mead tasting has certainly spurred me on in my Mead-ieval Quest, and I can’t wait to find out more. But for now, I think I’ll just go and have a little lie down, and dream of those warrior Britons and raiding Vikings, and all their wonderful mead-soaked adventures…