Ember Days and Genteel Ways: Dinner at the Castle

I’ve been doing a lot of cooking recently, and looking back at my past medieval adventures has got me thinking about castle mealtimes. So by way of connecting with my beloved Middle Ages at a time when I can’t get to a castle, I’ve started having a go at making some medieval dishes. I’d love to escape 2020 and go back the glory days of castles to see how it was really done. Then I could even enjoy a real medieval feast, as dining in a castle was a colourful, time-consuming and multi-sensory experience, and it was about far more than mere sustenance. Unlike the common conception of a load of drunken, rowdy oafs gorging on great plates of food and randomly hurling chicken legs over their shoulders, it was in fact, a much more civilised and congenial occasion. 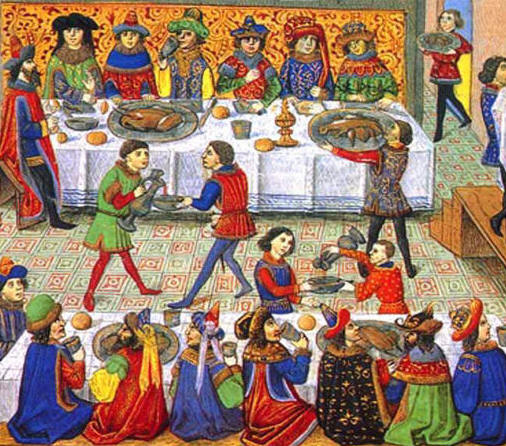 Servants bringing in the food as the meal gets underway

Medieval meals were generally taken earlier than we eat today because everyone got up around daybreak. The first priority was not a good cuppa and a full English, but a trip to chapel for the whole household. After mass came a simple breakfast of bread, sometimes with a little cheese or meat, washed down with wine or ale before everyone went about their daily business. The lord met with his stewards and bailiffs or members of his council while the ladies busied themselves with domestic tasks, embroidery or conversing with the guests, all to the sounds of clashing swords as the knights practiced their combat skills in the bailey. Meanwhile, the cook and his servants were busy preparing the main meal of the day in the castle kitchens, where meat roasted on a turned spit, bread was baked in circular bread ovens and stews and soups bubbled in great iron cauldrons set over a fire. In the great hall, servants set up trestle tables and laid them with cloths, silver spoons and cups and steel knives. Places were marked with a trencher or manchet, a thick slice of day old bread that served as a plate for roasted meat. Then, when all was prepared, sometime between 10am and noon, the sound of an announcing horn drew everyone to the hall for the main event of the day. 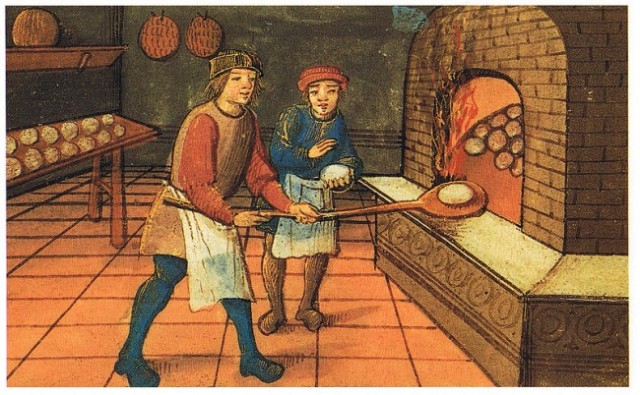 Nearly every aspect of dining was marked by ceremony and strict etiquette. Hands and nails were expected to be scrupulously clean, so on arrival the diners were met by servants with basins of water and towels. Where you sat denoted your status, and the seating arrangements were always designed to reinforce the social hierarchy. The lord and lady sat at the far end of the hall on a raised dais together with their most important guests and a church dignitary to say Grace, while everyone else sat below them in order of status, the furthest away from the lord being the lowliest.

There were rules for everything, from how every item, including the cloths, should be laid on the tables to the correct number of fingers the squire should use as he held the joint for the lord to carve. In fact, part of a squire’s training for knighthood involved learning how to serve his lord at meals. In an age before forks, meat was cut up with a knife and eaten with the ‘fingers of courtesy’, the thumb and middle finger, so that the mouth was kept hidden. The solid parts of stews and soups were eaten with a spoon and the broth sipped. Aside from those at the top table, trenchers and cups were shared between two diners and the lesser had to help the more important, the man helped the woman and the younger helped the older by cutting the meat, breaking the bread and passing the cup. The code of etiquette also included an extensive list of don’ts, including no dipping the meat in the salt dish, no leaning on the table, no stuffing the mouth or taking overly big helpings, no wiping hands on the cloth or drinking without first wiping the mouth, absolutely no burping, and diners must not “stare about, wiggle or waggle, or scratch the head”. So there. 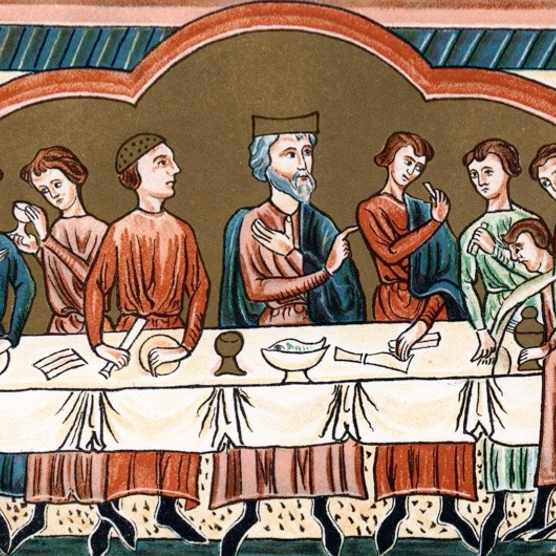 The main meal consisted of two or three courses on an ordinary day, and many more for a special occasion, depending on the size of the lord’s purse and how much he wanted to impress his guests. But however many courses there were, each was made up of numerous dishes, and once Grace had been said a procession of servants brought in the food, starting with the bread and butter followed by the wine and ale, and then the vast array of dishes.

The food was presented in many forms. As well as roasting and stewing, meat or fowl could be pounded to a paste, mixed with breadcrumbs, stock and eggs and poached like a dumpling, or mixed with other ingredients as a kind of custard. Sauces were made from herbs from the castle gardens mixed with wine, onions and spices, and mustard was widely used. These highly flavoured sauces often accompanied fish, which was eaten during Lent or on fasting days when meat was off the menu, producing dishes like Herring cooked with ginger, pepper and cinnamon. Vegetables featured too, the most common of which were peas and beans, and although these were staples of the pauper’s diet, they were also made into purees, the thicker the better, and served with onions and saffron for the wealthy. Fruits including apples, pears and peaches came to the table from the castle orchards, together with wild fruits and nuts from the lord’s woodlands and imported luxuries such as almonds, dates and oranges. On really special occasions such as weddings or Christmas, each course would end with the arrival of a ‘subtelty’, an elaborate piece of confectionary art, perhaps in the form of a swan or a ship or some festive motif, sometimes even gilded, and they were anything but subtle! Wine was bought by the barrel and decanted into jugs, but it was young and of lamentable quality and it didn’t keep, so it was often spiced to make it more palatable and served with the last course of cheese, fruits, nuts and wafers. 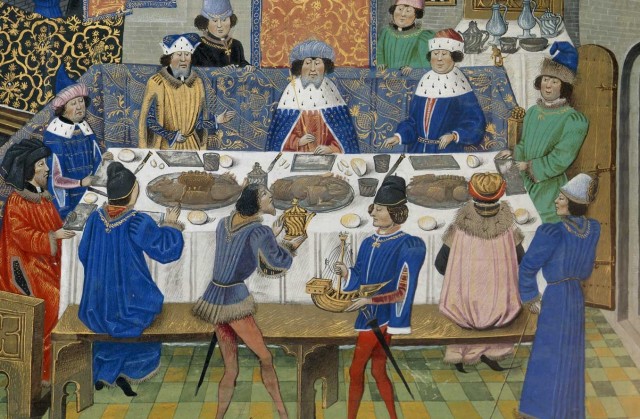 The end of a course at a banquet for Richard II is marked by the arrival of a ship subtelty, shown in the foreground

Even on ordinary days, the diners might be entertained at dinner. Many castles regularly employed the services of harpers, minstrels and jesters to entertain and amuse the guests with jokes, music, and songs of courtly love or heroic deeds. Once the meal was over, bowls of water came out for everyone to wash their hands again before the party dispersed to their various tasks and amusements and the tables were cleared. With the main meal of the day over, all that was left was a light supper taken in the late afternoon of, according to one account, “one dish not so substantial, and also light dishes, then cheese”. After such a substantial main meal, it’s a wonder anyone had room for anything else, but it does go to show that people clearly did follow the rules of modesty and restraint, and that they didn’t stuff their mouths or take overly big helpings… 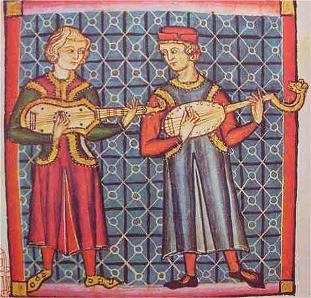 These past weeks I’ve been spending much more time in my own kitchen, preparing food and making all my own bread, and the process of producing a meal from scratch has made think of those busy castle kitchens. I wondered what all those medieval dishes tasted like, so I decided to have a go at recreating a few. The first recipe I tried is called Tart in Ymbre Day, or Ember Day Tart. Ember days were a set of three days – Wednesday, Friday and Sunday – of religious fasting observed during the first week of each seasonal quarter of the year. With meat off the menu on fasting days, cooks had to get creative in other ways. This tart was made with onions, which you parboil rather than fry, then mix them with butter, spices, herbs, cream cheese, eggs and some dried fruit, in this case sultanas, and the whole thing is baked in a home-made pastry shell. Medieval people didn’t distinguish sweet from savoury flavours as much as we do today, and the two were often mixed, so I was intrigued to see how my first foray into medieval cuisine would work out. Luckily, the result was a resounding success and Ember Day Tart met with lots of contented noises and demands for seconds. 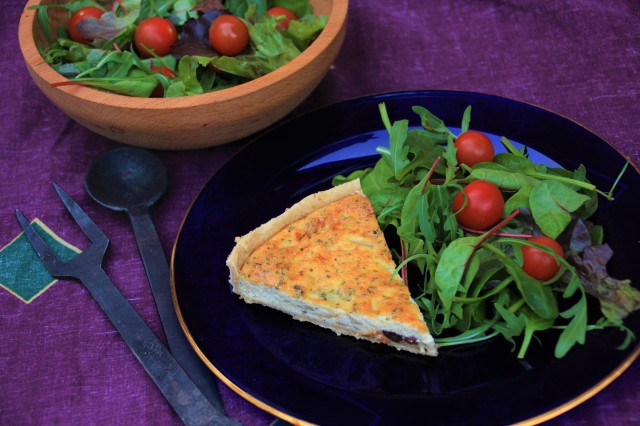 My first taste of the Middle Ages, Ember Day Tart

Now I’m hungry for more medieval culinary experiements. I want to get as close to medieval cooking as I can, so I’ve ordered a medieval fire pit, a cauldron to be suspended from a tripod over the flames, and a long-handled iron skillet to try out in the garden. So soon I’ll be rolling up my sleeves and losing myself in the smoke of the past, in the variety of flavours and aromas of the Middle Ages. And with luck, the results will open a window on the past, and give me a taste of one of those glorious castle dinners…

50 thoughts on “Ember Days and Genteel Ways: Dinner at the Castle”