A few weeks ago, after what seemed like eternity, I finally got to visit a medieval ruin again. Not a castle, but a rare example of a courtyard manor house built in the fifteenth century by one of the wealthiest men in England. And for a sleepy ruin in a quiet Oxfordshire backwater it has a lot to offer. For a start, it’s tucked away in an idyllic location beside the River Windrush amid beautiful, rolling countryside. It also has connections with the Scottish medieval history module I’ve just completed, and it has links with two of my favourite medieval kings, one of which came to stay at the manor. Perhaps even more intriguingly, some say that its most notable owner never left, that he still lingers around the ruins of his former home. 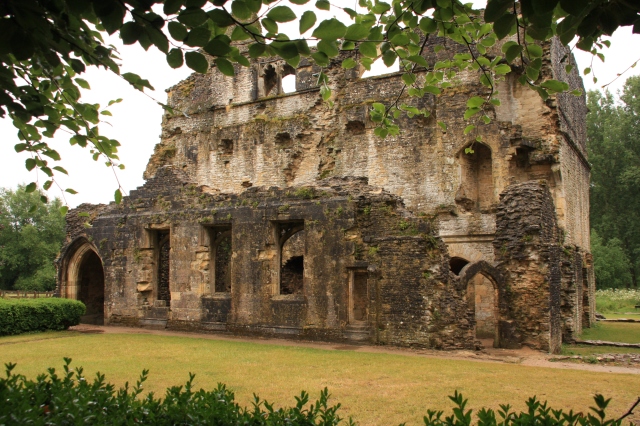 The village of Minster Lovell was originally simply called Minster, denoting a settlement of secular clergy serving a church. The church was, and still is, dedicated to the young martyr prince Kenelm, the son of Kenwulf, King of Mercia, who is believed to have been murdered in 819AD, and the minster would have been an important centre for what was once a large ecclesiastical district. Then, around 1124 Henry I granted considerable lands, including Minster, to one of his barons, William, whose nickname was Lupellus, meaning ‘Little Wolf’, probably reflecting his military prowess. Over time the name morphed into Lupel, then Luvel, eventually settling on Lovel, and the bucolic setting of Minster Lovell became the centre of the family estate from the thirteenth century until the Lovell line ended in the 1480s.

The hall sits in a tranquil setting beside the River Windrush 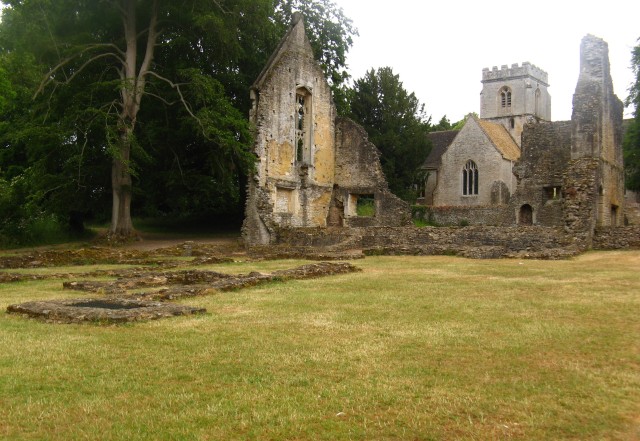 The manor was inherited by successive generations of Lovells, mostly – and confusingly – called John, with the odd William thrown in for good measure. One of the many Johns served King Edward I during the first Welsh war of 1277 (covered last year on my Castle Quest), and in 1296 when Edward turned his formidable gaze north, John was the marshal of the king’s army in Scotland, earning him the title Lord Lovell. He served Edward in Scotland in 1303 and 1304, and it was to him that the keys of Stirling Castle were surrendered following a three-month siege by the English king. The same good fortune, however, evaded his son, another John, who was killed at the battle of Bannockburn in 1314. But to meet the man who rebuilt the family seat into the grand courtyard home that we see today we must fast forward to the next century, to another Lord Lovell.

Looking across to the west range from the great hall, towards the kitchen with its well, and the stables beyond

The view from the east wing housing the service buildings, looking across to the great hall and the Lovells’ private apartments

In 1431 William, the seventh Baron Lovell, had returned from serving in France during the Hundred Years War, and it’s likely that this was when he began the massive makeover of his Oxfordshire home in the latest architectural style. Splendid and richly furnished domestic ranges were set around a courtyard, with the Lovell’s private chambers high up in prime position next to the great hall looking across the complex to the river and beyond. The house was entered through an elegant porch lined with stone seats where visitors could wait to be shown through, and the impressive great hall with its lofty windows would have been the scene of feasting and merriment around a central hearth. William also rebuilt the church of St Kenelm next to the manor, where he was entombed after his death in 1455, and which is also worth a visit. But for all its grand design, William’s magnificent manor would only be home to another two generations of Lovells.

Welcome to Minster Lovell Hall: the elegant porch leading into the great hall 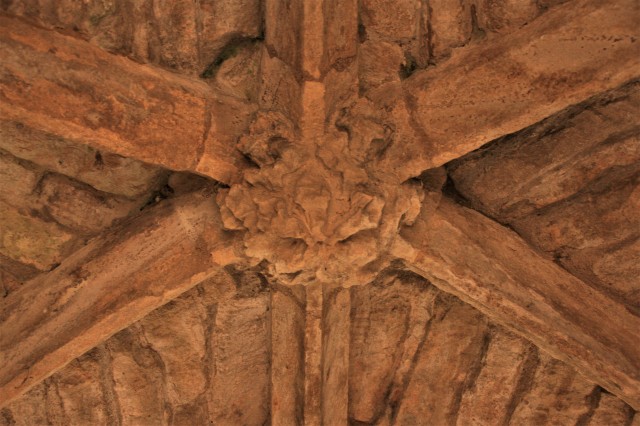 Surviving decorative bosses on the vaulted ceiling of the porch

The east end of the great hall

William’s son, yet another John, was a prominent Lancastrian in the Wars of the Roses, and was made master forester of Wychwood in 1459 for his services to Henry VI, but his son Francis, (at last, a different name!), took a different view altogether, supporting the Yorkist cause. He rose to high favour with Richard of Gloucester, the future Richard III, who as king made him Viscount Lovell and awarded him high status positions. The two became best pals, and Richard was even entertained as a guest at Minster Lovell in 1483, the year he became king. The rise in Francis’s power, together with those of another two of Richard’s faithful supporters, William Catesby and Richard Ratcliffe, was resented by some contemporaries, and the four became the subject of a caustic couplet: 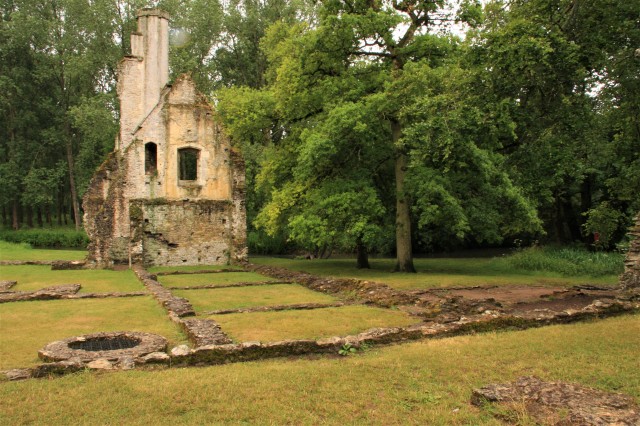 A view across the west wing to the southwest tower. This is thought to have been added by either Francis or his father, John, and had a high status apartment on the top floor. Perhaps this was where Richard stayed…

A carved figure gazes out from the outer walls of the south west tower. Could it be Francis, or even Richard III?

But again, the Lovell good fortune wasn’t to last. After fighting alongside Richard at Bosworth Field in 1485, Francis fled to Flanders, returning two years later to join a rebellion against Henry VII involving the young Lambert Simnel’s rival claim to the throne. And herein lies the mystery, because no-one really knows what became of Francis Viscount Lovell. The Yorkists suffered a crushing defeat at the battle of Stoke, near Newark in 1487, and Francis was reported by some to have been killed, while others state that he fled across the Trent on horseback. But the most intriguing account told that he escaped and lived ‘long after in a cave or vault’. This story gains some credence in a letter from 1737, written by William Cowper, clerk of the Parliament, to a reputable antiquary named Francis Peck, in which Cowper reveals that in 1708, while building work was being undertaken at Minster Lovell:

‘There was discovered a large vault or room underground, in which was the entire skeleton of a man, as having been sitting at a table, which was before him, with a book, paper, pen, etc., etc.; in another part of the room lay a cap; all much mouldred and decayed. Which the family and others judged to be … Lord Lovell, whose exit hath hitherto been so uncertain.’

Thus, the theory goes that Francis returned to Minster Lovell after the battle of Stoke and hid himself away, locked in a secret underground vault where he was cared for by a loyal servant. But the servant met with a sudden death, and as he was the only person who knew the whereabouts of his lord, Francis was left to his grisly fate. It is his spirit that is said to haunt the romantic ruins of Minster Lovell Hall, perhaps trying to recapture those days of his former glory and the fun times he spent here with his royal best friend.

Francis was the last of the Lovell family to inhabit the manor. Accused of treason, his lands were confiscated by Henry VII and granted to his uncle, Jasper Tudor, and the new king is reported to have visited the property in 1494 and 1497. Later, in 1602, the manor was bought by Sir Edward Coke, in whose family it remained until they left in favour of their new mansion at Holkham in Norfolk, and the old principal seat of the Lovells was finally abandoned.

If the spirit of Francis Lovell has any sense, he’d have been tucked up in his cosy vault on the day we visited because it was a freezing summer’s afternoon. Still, there’s no denying that his home is a very atmospheric and tranquil place to wander around, probably all the more so for the inclement weather. But for a first visit to a medieval site in way too long, it did nicely for me. I loved exploring the ragged remains of this former grand house, and walking in the footsteps of its great medieval owners and the king whose demise closed the Middle Ages. And if I ever do meet Francis roaming around these romantic riverside ruins, I’ll shake his insubstantial hand and thank him for his loyalty and support, right to the very end, for the last Plantagenet king. 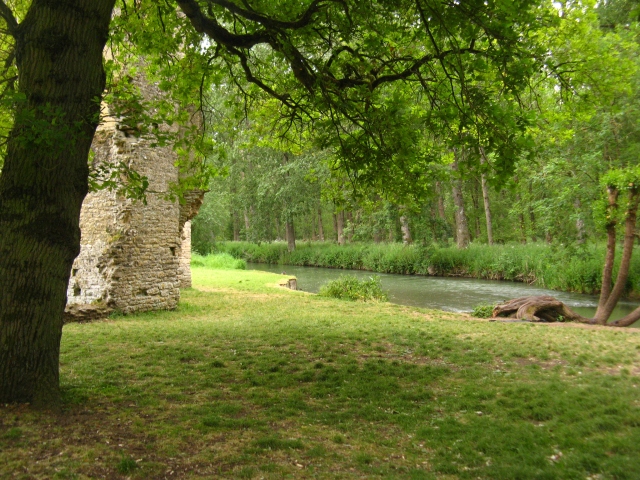 52 thoughts on “The Spectral Mystery of Minster Lovell Hall”