Loyalty and Betrayal at Old Sarum

With my Low Castles warning light flickering again, this weekend meant seeking out some castle therapy.

Old Sarum is unique. Its ruins crown the summit of an Iron Age hillfort in the rolling Wiltshire countryside near Salisbury, and it proudly takes its place within this ancient landscape. It’s a medieval remnant, replete with echoes of its eventful past, and the impressive earthworks on which it stands can boast some 5000 years of history.

There’s evidence of this site as a place of reverence as long ago as 3000 BC, and it’s thought that the Celts constructed their impressive hillfort around 400 BC in a commanding position on a ridge separating the Rivers Avon and Bourne. Referred to in the Roman records as Sorviodunum, a military post was located nearby, and with an important road junction just outside the eastern gateway a small town grew up in the area. After the Romans left, the former Celtic fort became part of a Saxon royal estate, and it gave shelter to the people of nearby Wilton when the Vikings burned their town in 1003. So by the time the Normans arrived in 1066, Old Sarum had already clocked up an impressive past. 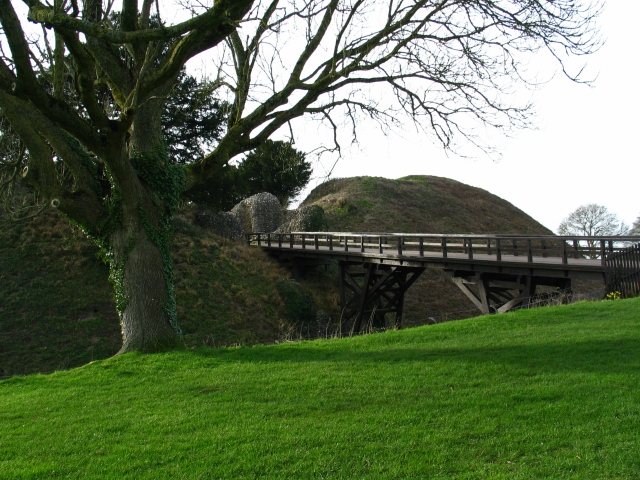 Soon after the Conquest, the ready-made site came to William’s attention as having great potential for a fortification and administration base. Old Sarum became part of his ground-breaking castle building project that was to reshape England under his rule. A vast mound was constructed in the middle of the hillfort, complete with deep defensive ditch across which a bridge, later converted to a drawbridge, led to an entrance gatehouse. The rest of the fort became the outer bailey, with new raised ramparts enclosing an 11th century cathedral, the footprint and some walls of which still cling to the land. This was relocated to the new town of Salisbury in 1220 when work began on the cathedral we see today. 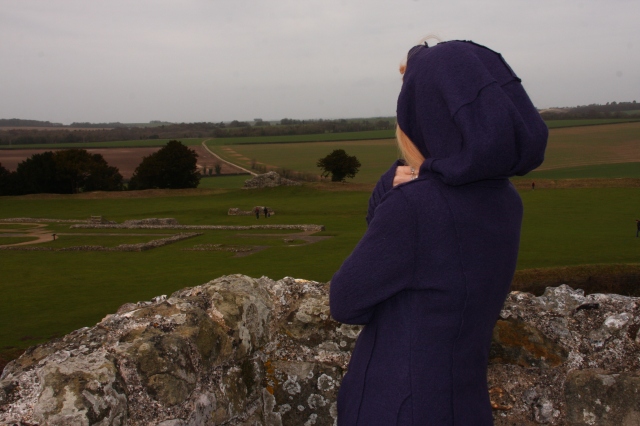 Looking out over the outer bailey from the keep, with the cathedral
remains below

The outer ramparts, with Salisbury and the relocated cathedral in
the mist beyond

During the Conqueror’s reign, the castle played host to one of the most pivotal events in English history. On 1st August 1069, in order to consolidate his authority and ensure the loyalty of his subjects, William summoned every man of account in the land to Old Sarum. According to the Saxon Chronicle, “his council came to him, whosoever’s men they were, and swore oaths of fealty to him that they would be faithful to him against all other men”.  This meant that if one of the barons of William’s new realm were to take up arms against the Crown, his sub-tenants’ loyalty would be not to their treacherous lord, but to their king. The Oath of Sarum stamped our first Norman ruler’s enduring authority over a newly-born feudal England.

The inner bailey is substantial in size, and even though only the rubble cores of the buildings remain ꟷ the outer, squared off ‘ashlar’ stones having been removed by permission of Henry VIII ꟷ it’s still possible to gain a sense of how impressive the castle would once have been. A large stone keep, of which only the basement remains, replaced the old wooden structures in 12th Century, and one of its earliest owners, Bishop Roger of Sarum, a close pal of Henry 1st, had a new palace built around 1120. But Roger couldn’t have been very popular, because in 1139 he spectacularly fell from grace under the next king, Stephen. Following a contrived quarrel, Roger died later that same year having being arrested and all his lands confiscated. His obituary concludes: “While to many he seemed a man of sorrows, yet very few were sorry for him”. 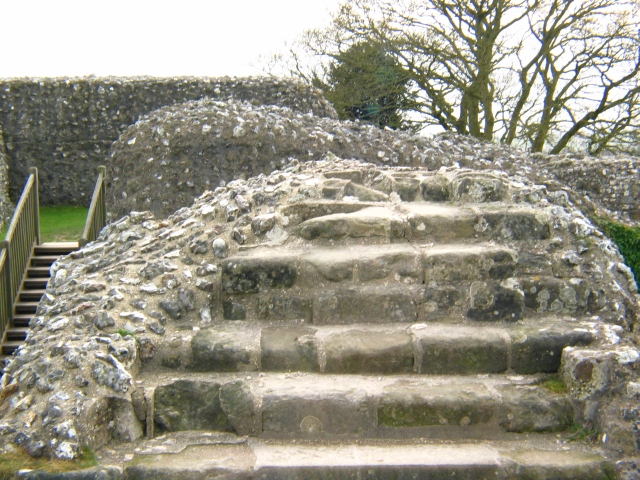 Spectral stairs leading nowhere, but once they were the way into the keep

A moment of quiet contemplation in the castle’s chapel, part of the
12th Century palace

The Plantagenets also had a fair hand in the affairs of Old Sarum. Henry II, head of one of the most dysfunctional families in history, imprisoned his wife, Eleanor of Aquitaine here for most of the 1170s. She was arrested after she shockingly betrayed Henry, rebelling against him with his sons, and the king kept his own wife in captivity for over 16 years, albeit in comfort, and much of it here at Old Sarum. In the early 13th century changes of building use led to another new hall, complete with kitchen and bakery, being built during King John’s reign.  However, despite being constructed in the new fashionable Gothic style, the hall was never properly maintained. As early as 1247 it was in a declining state and in 1307 the roof fell in. Its neglect is probably the reason why, on the left side of the keep, a few low straggling walls are the only signs of its existence.

The kitchen: the most that remains of the new hall complex built in
King John’s reign, looking across the inner bailey to the keep and
Roger of Sarum’s palace

I loved wandering around this spectral castle atop an ancient hillfort. Not only do the voices and events it witnessed seep from its skeletal walls, but the views of the surrounding countryside are beguiling. It’s easy to see why successive peoples left their imprint on this imposing corner of England, and how they made their eternal marks, carving their own stories into the chiselled ramparts of the land.

49 thoughts on “Loyalty and Betrayal at Old Sarum”