Goodrich on the Ground

Oh, glorious Goodrich! After flying over this beautiful medieval castle the other day, I got to wander around its majestic towers and russet walls yesterday. And what a beautiful day it was.

As the aerial photos show, it stands above the rolling countryside of the Wye Valley near the Anglo-Welsh border, guarding an important crossing point in the river. But despite putting out a message of who was boss in the area, this particular castle can claim to have led a fairly peaceful existence, only having been besieged once, and that wasn’t even during the Middle Ages. So the story of Goodrich is best told through the people who owned it, because despite being tucked away in a rural idyll, the castle was owned by a string of medieval celebrities stretching all the way back to the 11th Century. 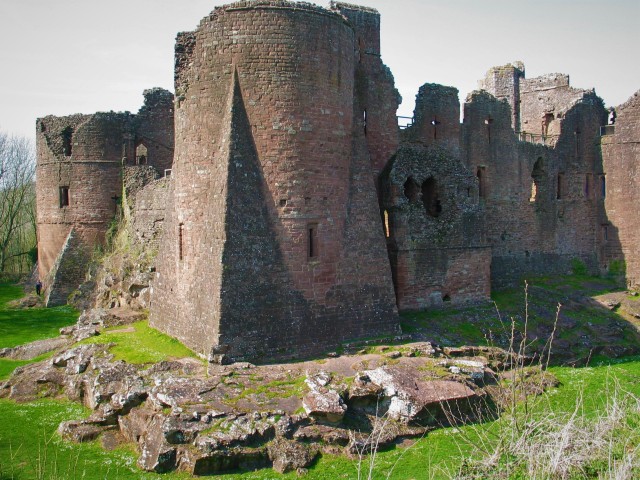 On the approach: the castle standing proudly in its cavernous craggy ditch

But first you have to admire its sheer presence. Standing proudly within an expansive dry moat cut from the hill, it’s almost as though the castle’s towers have grown up out of the craggy rocks that support it. Four huge round towers and a barbican protecting the impressive gatehouse all surround a modestly-sized inner courtyard, and as you wander through the rooms, you can sense the presence of these charismatic medieval owners. 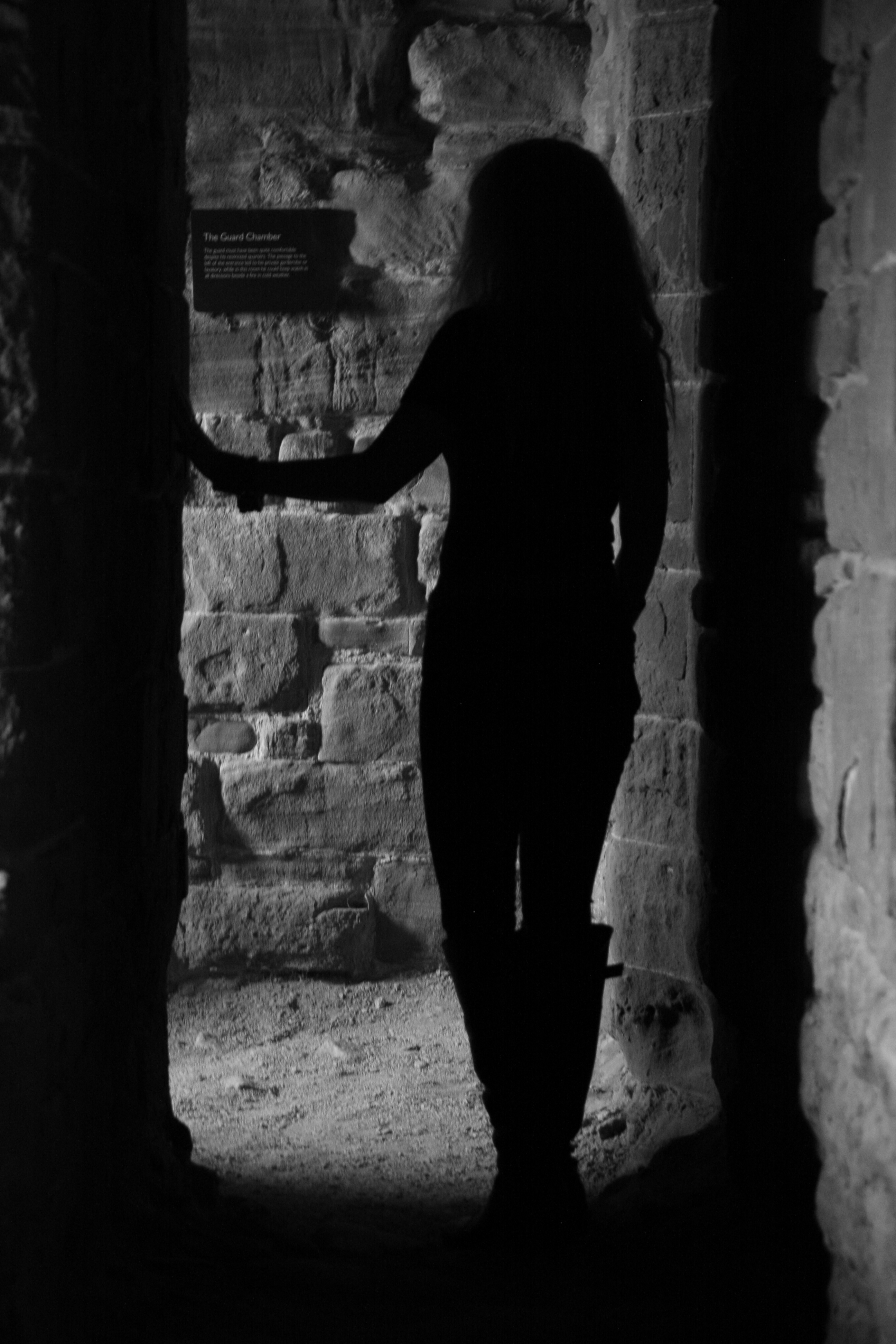 The name Goodrich is an overhang from the first recorded occupant of the land, a man called Godric Mappeson, who was probably a Saxon noble. There’s documented evidence to tell us that by 1101-2 a certain ‘Godric’s Castle’ was in existence, and the name stuck when a Norman family, the de Clares took possession of it during the civil war between King Stephen and Henry I’s daughter, Matilda in the 12th Century. Gilbert de Clare and his son Richard ‘Strongbow’ supported the king, and Gilbert acquired the title Earl of Pembroke for his loyalty. It was most likely around this time that the grey stone keep was constructed, and this would have been the focal point and the main symbol of power of the earlier castle. 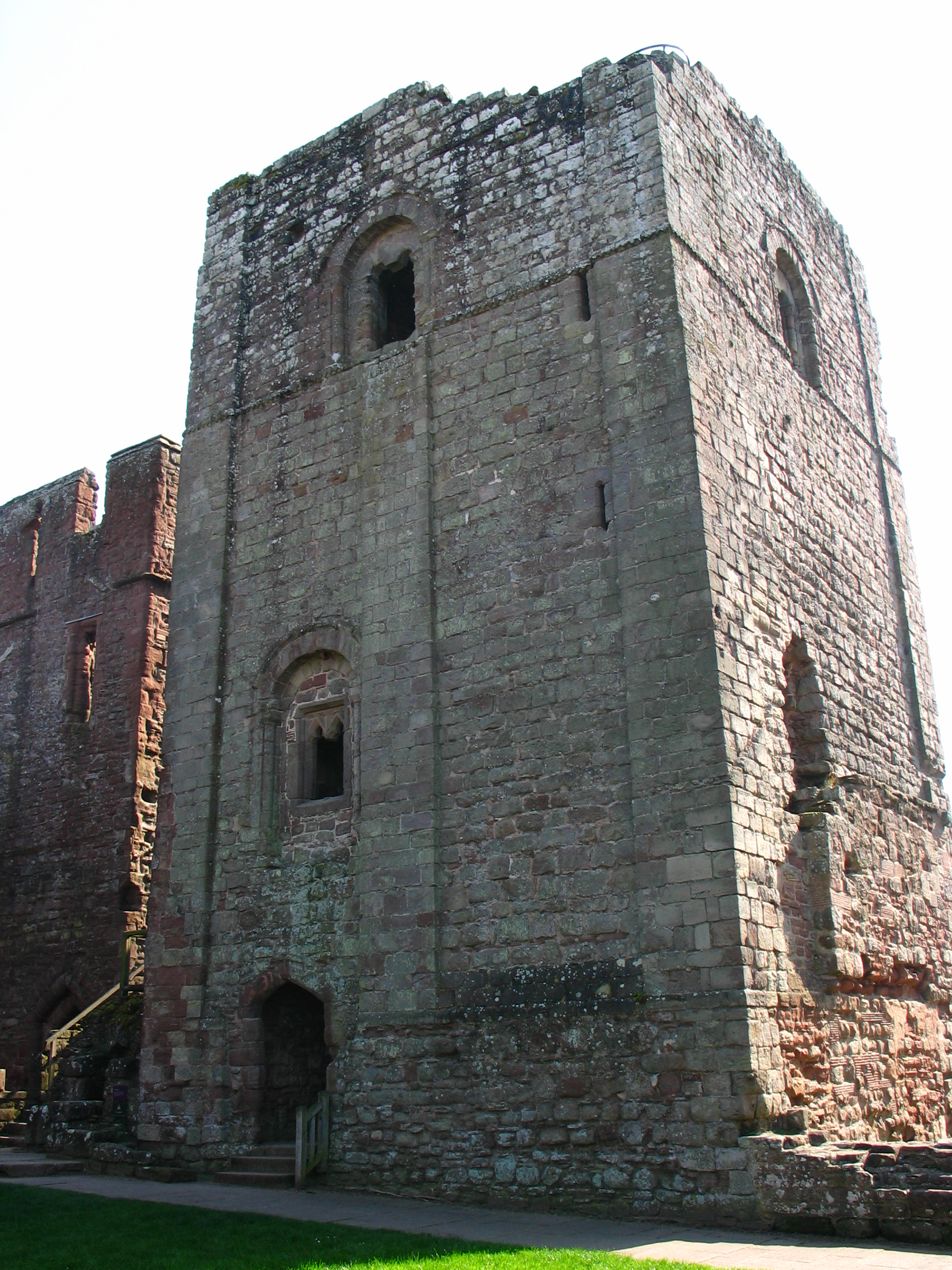 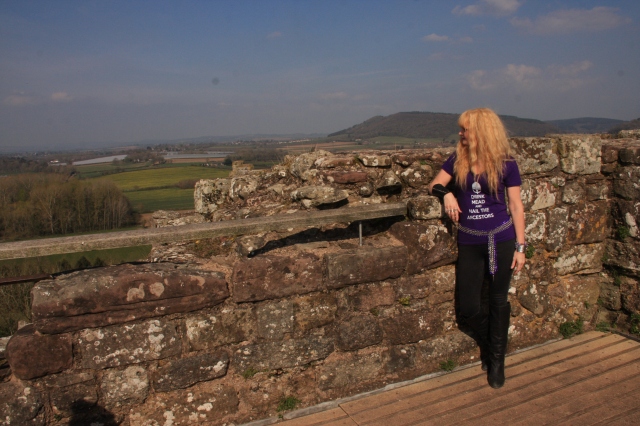 Enjoying the view from the top of the keep

But symbol of power or not, this was the Middle Ages when fortune could be a fickle mistress, and trouble hit Richard ‘Strongbow’ de Clare after he inherited Goodrich. When Matilda’s son, Henry II, became king in 1154, he took a dim view of the de Clares siding with his mum’s rival. To make matters worse, Strongbow sloped off to Ireland against the king’s instructions, where he fought with the exiled Irish King of Leinster, Dermot MacMurrough, to regain his throne. In return for his help, Dermot gave Strongbow his daughter Aoife’s hand in marriage and the succession to his kingship.

The couple’s daughter, Isabella, would eventually inherit Goodrich, along with all Strongbow’s lands in Ireland and England, including Chepstow and Pembroke. But Isabella was married off by Richard I (the Lionheart), so her property and fortune passed to her new husband. But she still did well, because her betrothed was none other than William Marshal, the greatest knight in history and all round gorgeous pin-up hero of the day. ‘The Marshal’, as he was known, is another post altogether, and is one of the best characters of the whole Middle Ages. Having raised himself up from humble beginnings he became not just our most respected soldier and statesman, but he ended up as Regent of England for Henry III. William was one of the greatest castle builders of his time, and although we don’t have any solid evidence of work at Goodrich, it is very likely he strengthened its defences in towers of stone. However, the striking red sandstone edifice you see today came about in 13th Century, thanks to a despised French half uncle of Edward 1st (of Welsh castle fame). 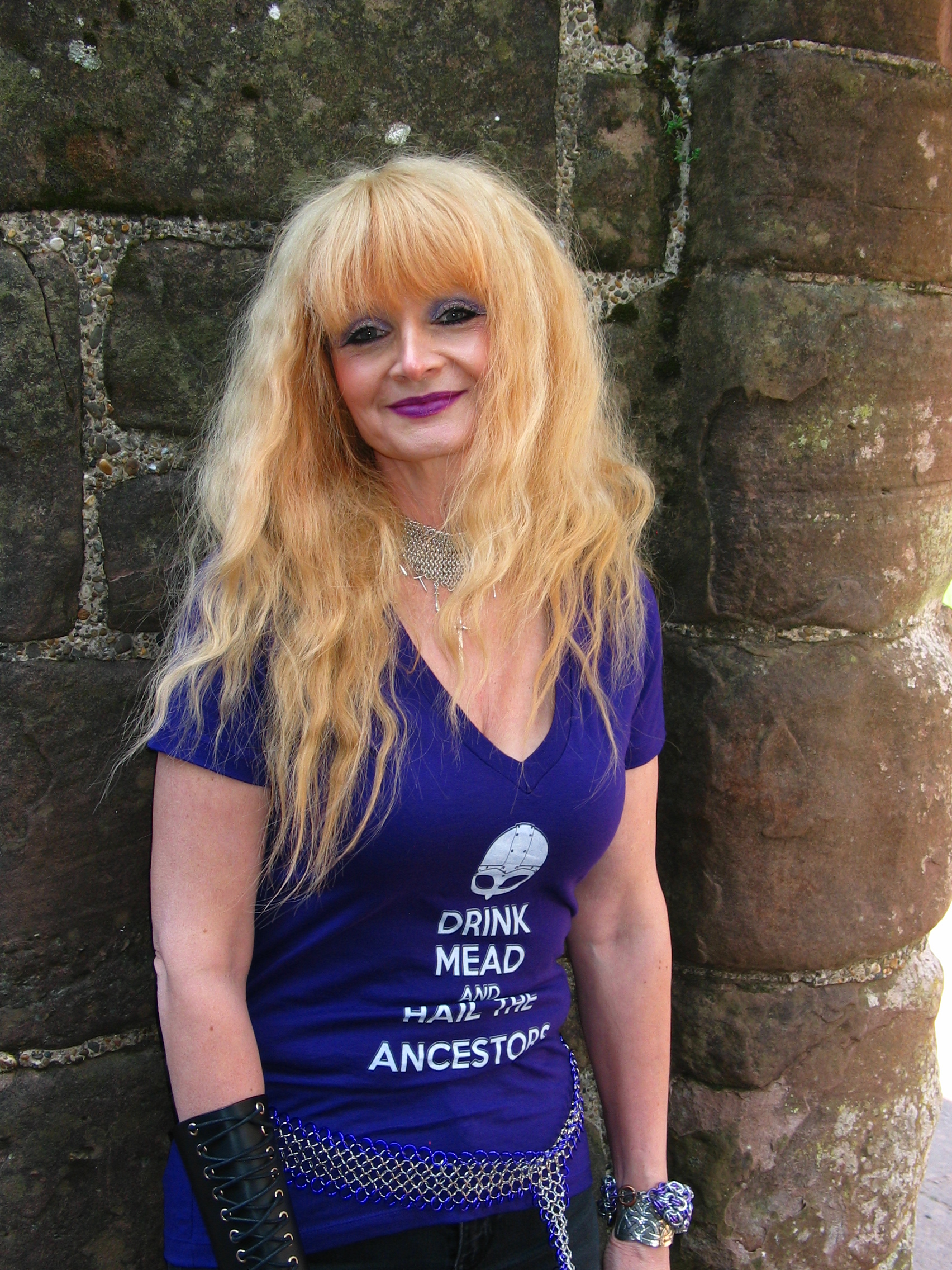 Goodrich filtered down through descendents of William and Isabella Marshal, ending up in the hands of Joan, one of their grandchildren. In 1247 Joan was also married off, by Henry III, to his unpopular half brother, William de Valance, and it was under his ownership that the castle took on the form we see today. He may have been seen as a foreign upstart by many English nobles, but the king and the then Prince Edward loved him. He accompanied Edward on crusade in 1270 and, supported him as king during the first Welsh war of 1277-8. William’s loyalty saw builders sent by Edward to create a barbican to mimic that of the Tower of London, and to reshape Goodrich in the latest fashion. But in 1296 William died after being wounded in a skirmish, so it was his wife Joan and her household that lived at the castle for long periods, where records of her expenditure on food and provisions suggest she may have thrown a few memorable parties.

The castle was further altered over successive centuries as it passed from distinguished courtiers to prominent military figures, but the beautiful bolt-between-the-eyes building that dominates the landscape to this day belongs to the 13th Century, to William de Valance and his partying widow Joan. A wander round its walls will not only show you the latest in 13th Century castle design, there are also remnants of all the mod cons afforded to the de Valences in their refurbishment of Goodrich. The solar block and guest rooms have their own built-in wash basins as well as ensuite facilities, and there are some tantalising clues in the fine architecture as to the level of luxury the de Valences enjoyed. 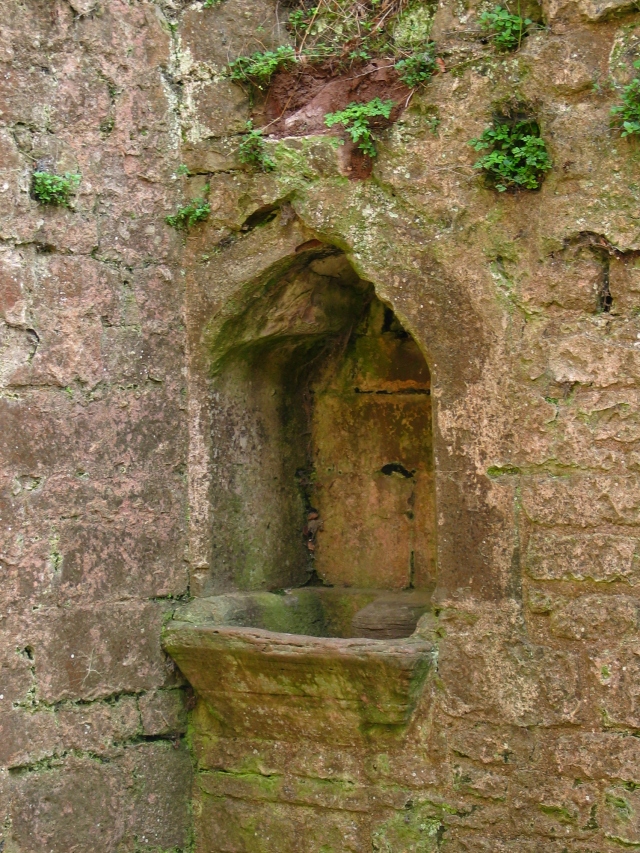 All mod cons: one of the many plumbed-in hand basins added during the de Valence 13thC rebuild 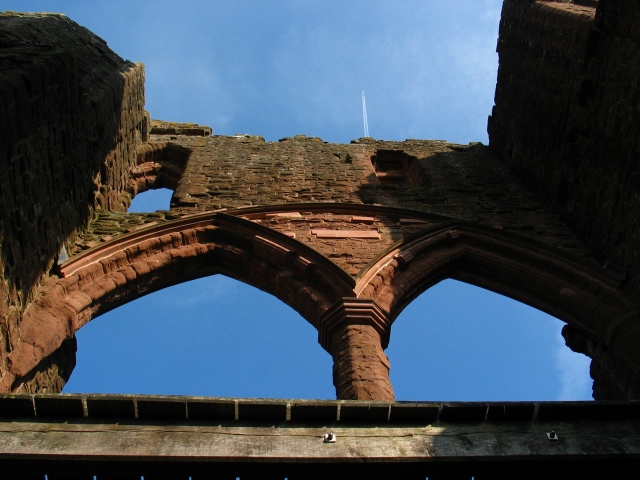 The solar block, or private apartments. These rather grand twin arches are believed to be modelled on a similar design at Chepstow Castle

No visit is complete without a walk around the dry ditch, where you can appreciate the scale of work needed to balance those towers and their massive buttresses on the chiselled crags. The ditch also contains the remains of the stable floor. It was the horses housed here that were led to safety during the only siege that befell the castle, during the Civil War in 1646, a reminder of which lives in the inner ward in the form of a famous cannon. Roaring Meg, as she is known, was forged locally on the orders of the Parliamentarian commander John Birch as a powerful weapon of their attack. Another castle left in ruins thanks to the machinations of Oliver Cromwell. 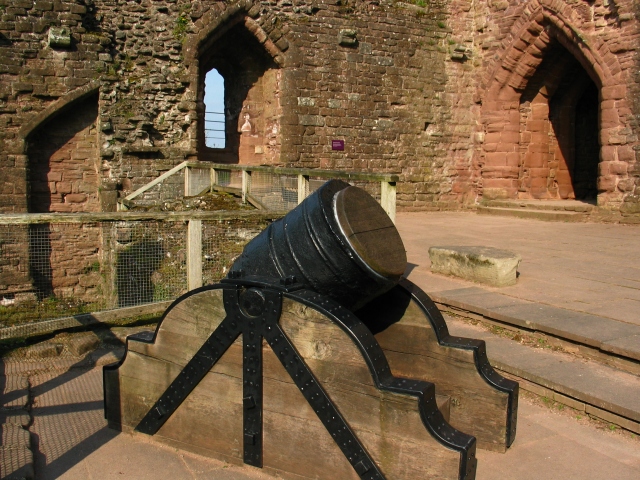 Roaring Meg – one of the cannons that did the damage

The south-east tower from the moat – how impressive is that? 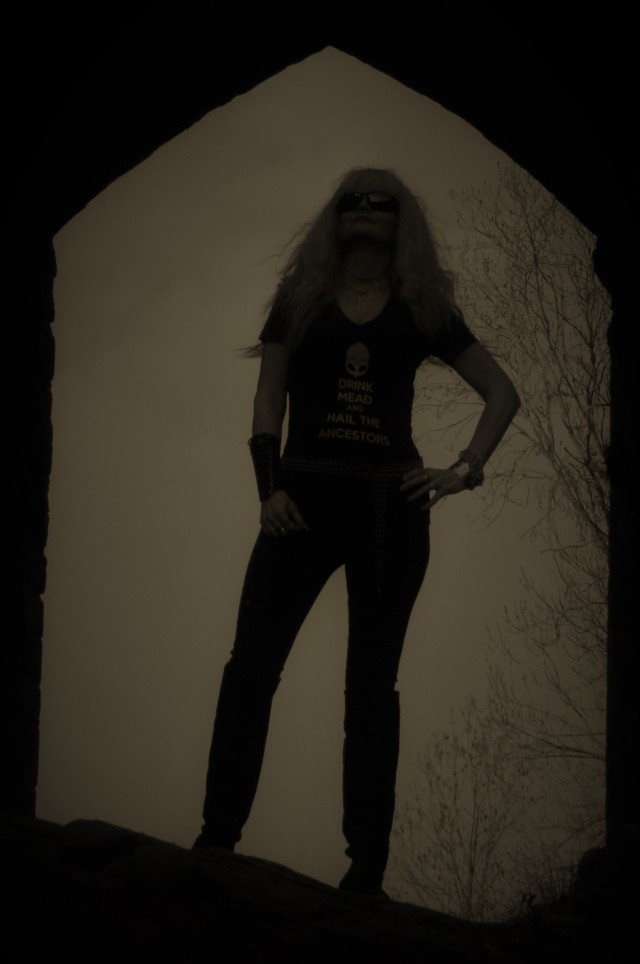 But even after a ravaging by the roundheads, Goodrich remains one of the best preserved, and certainly one of the most captivating of medieval castles in England. Its walls echo with the dramas of its successive owners, yet somehow, when I’ve been there and admired its beauty and its outstanding position amid the verdant Herefordshire landscape, I feel a deep sense of peace, soon followed by a longing to return once more to the embrace of its warm, majestic walls.

65 thoughts on “Goodrich on the Ground”