The Saints and Sinners of Old Buckingham Town

After a week of hard study, yesterday came as a welcome break with the chance to do an 11-mile walk in preparation for my Big Castle Wander this summer. We decided to stay local, wandering through the countryside and on to our town of Buckingham to explore its medieval past.

Setting off from Coombs woodland, we strolled for a few miles until we reached Thornborough Bridge, the only surviving medieval river crossing that took visitors  towards Buckingham. Nowadays it hides from view down a slip road off the A421, the far less inspiring modern route into town. After admiring this and the nearby Bronze Age burial mounds, we set off across the fields on a journey of discovery, our snaking walk taking us past deserted medieval villages, gushing weirs, a reservoir and a disused arm of the Grand Union canal, none of which we had ever realised were there. After this trek into the unknown, we emerged into the familiarity of our local town to explore the stories it has to tell. And we weren’t disappointed. 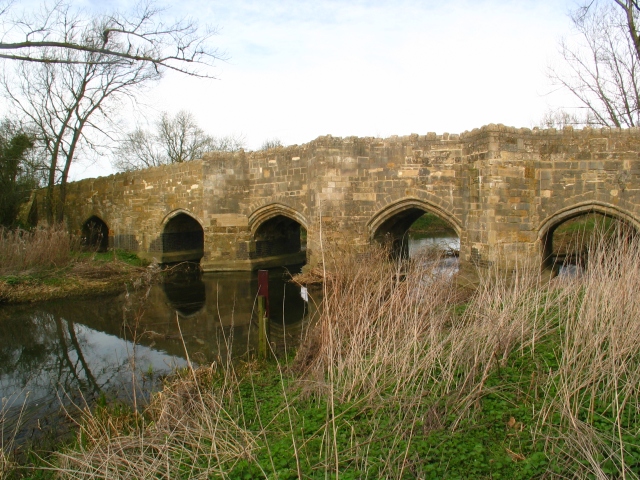 Thornborough Bridge, dated to 1400, served the medieval folk as a crossing
to the town. So much more stylish than the A421! 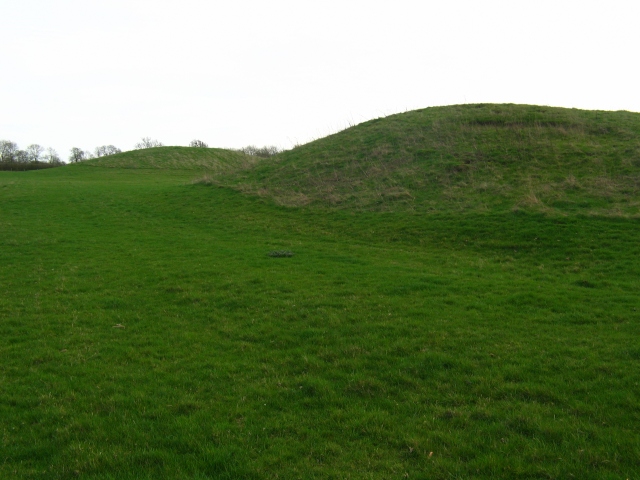 The ancient and the medieval side by side. Close to Thornborough Bridge are these two substantial Bronze Age burial mounds.

Right in the centre of town stands the imposing Old Gaol Museum. Built in 1748, it replaced the previous prison in the nearby castle which, sadly, is no more. Now the town’s museum run by a small army of dedicated volunteers, it’s a charming mine of information on Buckingham’s rich and varied past, with regularly changing exhibitions in its covered courtyard. Inside are all kinds of treats for the history hunter, set out over two floors and making use of the original cells, from archaeological finds to stories of the inmates who were detained within the gaol’s walls. One such rogue was James Bliss, who at just 14 years old robbed a local firm of solicitors where he worked as a junior clerk in 1867. In an audaciously planned burglary, he returned to the office over four consecutive nights to make a hole in the wall to the firm’s strong room. But instead of being angry, his boss appears to have been more hurt, as he was quoted in the local newspaper as saying: “I would rather have lost all the money than he should have done it”.

The Old Gaol Museum. It was a prison, but it looks like a castle –
that’ll do for me!

Back in the early Middle Ages, Buckingham occupied an important strategic location for King Alfred the Great against Viking attacks, and apparently he made it the capital of his new county in 886. His son, Edward the Elder, upgraded the settlement to a ‘burh’, meaning we could mint money for the king. Among the museum’s exhibits are nine beautiful coins from the Lenborough hoard, the largest Saxon hoard ever discovered, unearthed from a local field in 2014. The coins were struck during the later reign of Cnut, and those on display here were struck by the town’s moneyer, a man called Leofric. Another impressive find is a well-preserved Viking spearhead found at the base of the old castle hill, reflecting the occupation by the Danes of their southernmost lands. Buckingham was as far as they got, and it seems that our town saw some major conflicts as Alfred, and then Edward, fought for control of the area. At the beginning of 10th Century the Danes were in control, but we bore the brunt of the Viking’s fury after Edward captured one of their important Bedfordshire strongholds. Thus began a reign of terror, when Buckingham and its villages were raided and plundered and the inhabitants slaughtered, the violence only ending when Edward launched a successful counter attack.

A beautiful coin from the Lenborough Hoard on display with eight
others at the Museum. 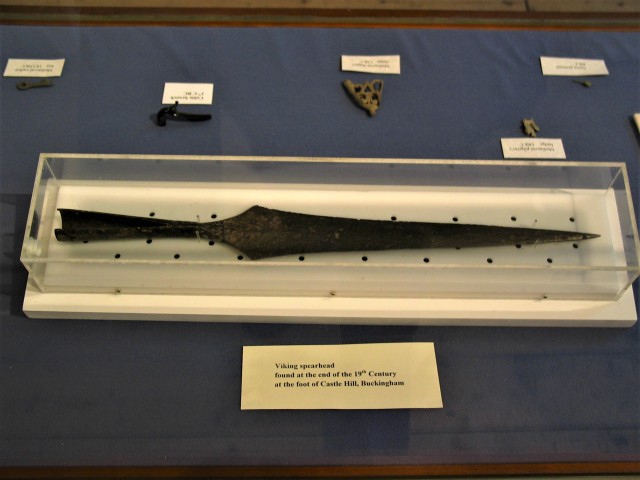 The well-preserved Viking Spearhead found at the base of Castle Hill stands testament to the conflicts Buckingham endured in the early Middle Ages.

There aren’t many towns that can boast their own saint, but Buckingham can, and ours must be unique because he only lived for 3 days! According to a medieval document written around 1086, the infant in question, Rumbold, was born of royal parentage around 650 AD. His father was the King of Northumberland and his mother the daughter of King Penda of Mercia. The story goes that the royal couple were travelling to Mercia for the birth when they made camp in “a pleasant field with lilies and roses” near the village of King’s Sutton, around 12 miles west of Buckingham. It was in this meadow that Rumbold was born.

On the day he was born, Rumbold purportedly announced in a clear, loud voice three times: “I am a Christian”, then he said that he wished to be baptised. This declaration would have been a surprise to his parents, because aside from their newborn speaking, Christianity in England was rare at that time. Nevertheless, his wish was granted and he was baptised in a font, the supposed original of which still resides in King’s Sutton church. The next day Rumbold amazed everyone again by delivering a full sermon on Christian virtues before foretelling his own death and giving strict instructions as to his burial. He wanted his bones to spend eternity in the place that was to become Buckingham, so his tomb and shrine were housed in the local church – incidentally, this is the same church in which our three murderers claimed sanctuary in the story in my previous post on Outlaws.  The baby’s shrine became a popular place of pilgrimage where miracles could happen, but sadly the church collapsed in 1776 so nothing remains of the extraordinary legend today, save a plaque on the site and a well dedicated to his name that supplied approaching pilgrims with holy water. In the Middle Ages, having a saint’s relics meant big business for a town, so Buckingham did well from little Rumbold and his brief and bizarre life. 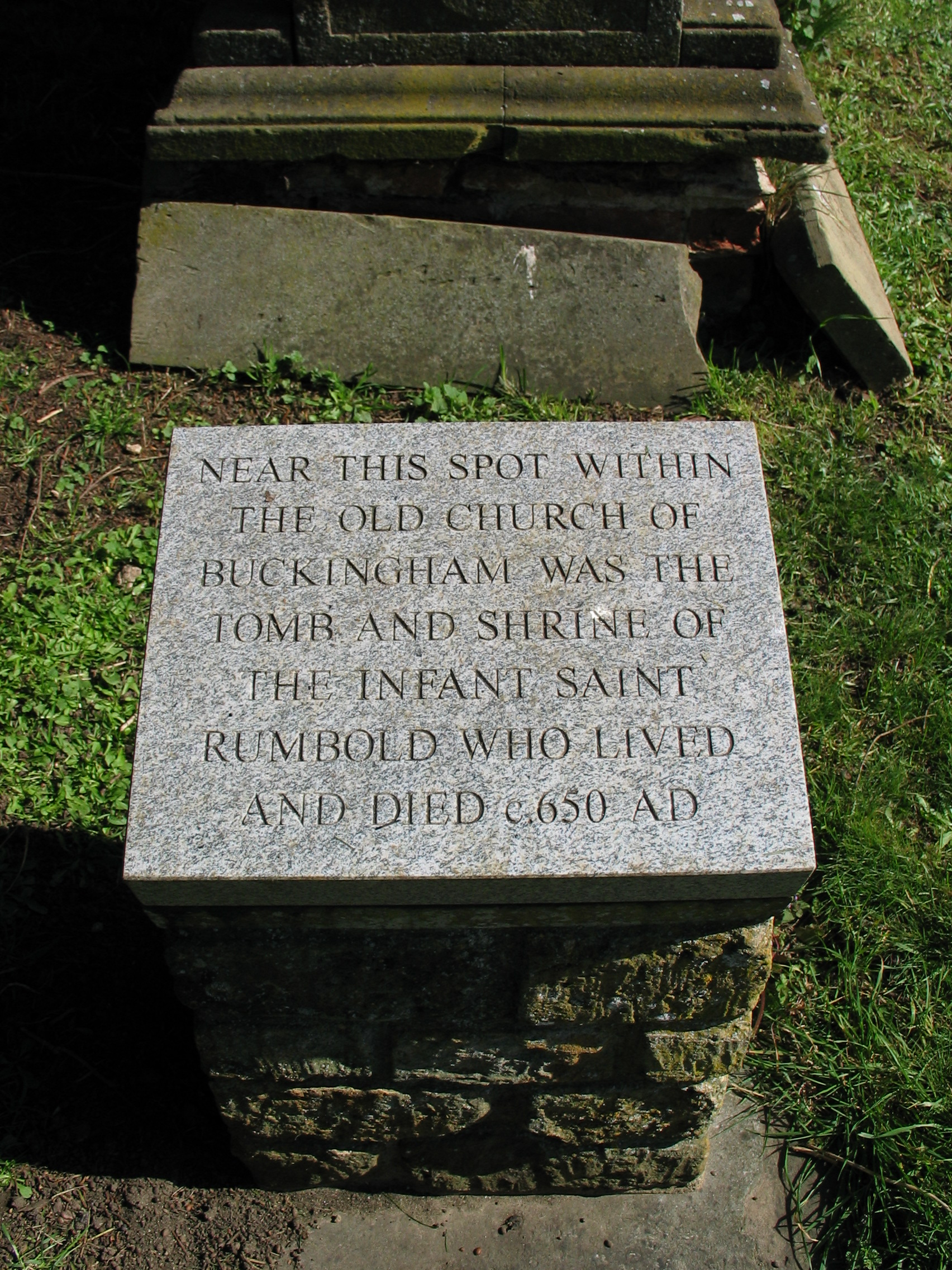 The plaque in the churchyard tells visitors that Rumbold’s bones
once rested here.

The site of St Rumbold’s well is a short stroll from the town centre. Little remains of this memorial, but at least it’s possible to locate it, and there is a small plaque of the baby saint on the surrounding railings.

The remains of St Rumbold’s Well

We then made a stop at Buckingham Chantry Chapel, the oldest building in town which was originally founded as a hospital for the poor in 12th Century. From 1423 it housed the new Royal Latin School and although this later relocated within the town, the Chapel is still known locally as the Old Latin. Nowadays, under the protection of the National Trust, it serves as a delightful second hand bookshop and coffee shop, reached through the striking original Norman doorway with its characteristic zigzag moulding. So for a good cuppa, some great conversation with the volunteer staff and a good read, this is the place to go.

The Chantry Chapel is a great place to stop off for a bit of history, a chat
and a good cuppa. 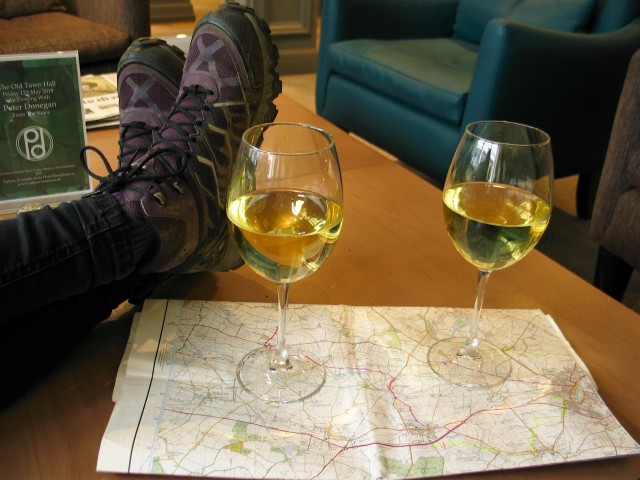 …and we never forget a wine stop!

After a further wander round the town and the obligatory wine stop at a local hostelry, we wended our way across the fields back to Tingewick.  As we reached home, we couldn’t help but reflect on how much history is there for the taking in our own back yards. Our curiosity is quashed by familiarity and the madness of our frantic modern lives. But the past lingers in the very fabric of our local landscape, and the ancient voices still call to us. So every now and then, we’ll think of the people who went before us, and travelled our land on foot. And in some small way we’ll do the same, leaving our own footprints on the paths of history.

65 thoughts on “The Saints and Sinners of Old Buckingham Town”