Medieval mysteries: One in the Eye for Harold?

History is all about solving mysteries – discovering the truth about what really happened in the past, and why. For historians, this entails extensive and painstaking research and usually a fair amount of arguing among themselves as to whose version of events is right. A good example of a much debated story comes from one of the most famous battles in history that gave us England’s best-known date: 1066. On 14th October of that year, the Norman Duke William ‘the Bastard’, soon to be known as ‘the Conqueror’, together with his formidable army, defeated King Harold Godwinson on a field in Hastings and changed England forever. The Saxons put up a good fight that day, but the battle came to an end in the afternoon as Harold famously looked up and was hit by an arrow in the eye. Or that’s what we’ve been told by the iconic representation in the Bayeux Tapestry. But hidden away in the Belgian national library there’s a precious contemporary source that says otherwise. And that tells us Harold suffered a much nastier death. 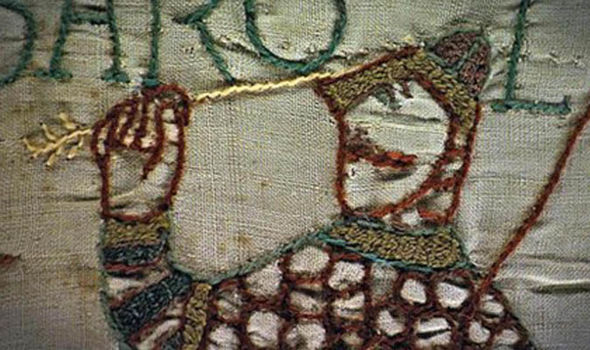 The Bayeux Tapestry shows Harold’s end twice, firstly in the famous image, clutching the arrow in his eye, and this is followed by another representation of him having fallen, minus the arrow, his leg being cut at by a mounted Norman. One theory states that after the Saxon king was killed, they cut his leg off and waved it around to show the battle was over, so the tapestry seems to be telling us that this was the order of events. However, we know the arrow was stitched on much later, and that there was no written mention of the arrow in the eye story until around 60 years after the battle. So what really happened? According to other sources, it’s quite likely that the legendary way Harold died was, in fact, a big fib.

Tucked away in the Royal Library of Belgium in Brussels there’s an extraordinary medieval document, our earliest account of the battle. The Carmen de Hastingae Proelio, the poem or song of the Battle of Hastings, was written just months after that fateful day in 1066. Openly biased towards William, and possibly even created for him, it recounts the events leading up to the battle and its aftermath, and gives a detailed description of events. According to the Carmen, it wasn’t a stray arrow that killed Harold. Instead, it tells us that our last Saxon king was the victim of a dedicated death squad sent in by William himself to seek out and kill him. In a shockingly violent attack, Harold was seized, cut down and – without going into too much gory detail – he was hacked to pieces. If this account is true it would be one explanation as to why, when it came to finding his body on the battlefield, his wife, Edith Swanneck, was the only one who could identify him by ‘certain marks known only to herself’. 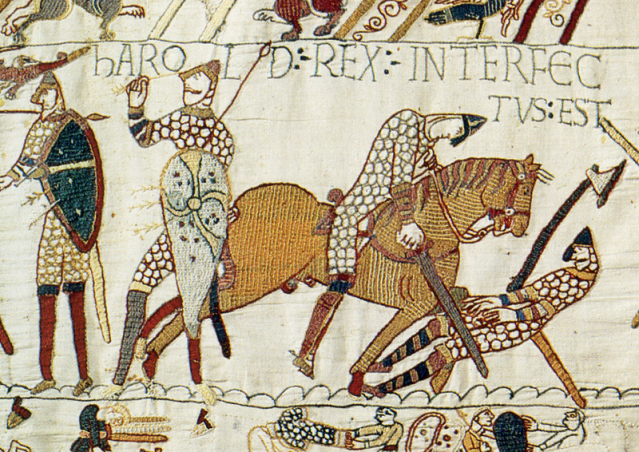 The bigger picture: the arrow followed by what supposedly happened next.

So why the arrow story? One reason could be that, being a work of such size and magnificence, the Bayeux Tapestry would have been periodically displayed in either a cathedral or secular building, so would have been seen by a much wider audience than the Carmen. But in the Middle Ages, the killing of an anointed king was a heinous offence against God. It wasn’t the done thing to kill the man chosen and raised up by the Almighty to rule over his land. Such a dark deed would have made people anxious and fearful of divine reprisals, so for the purposes of PR for the wider audience, it would look much better if Harold’s death had been an unfortunate accident rather than a pre-arranged murder. A much more acceptable story would have been:  ‘Oops, he just looked up at the wrong moment, and we don’t know whose arrow it was that killed him’. Then, if he was already dead, it would have been more acceptable to cut a piece of him off to declare that God had decided in favour of William. Sending death squads into the thick of battle to find a specified target wasn’t uncommon in medieval times, so the indomitable and vengeful William may well have planned a brutal end for the man he considered had stolen his rightful crown. It’s a topic of perpetual debate among historians, but for my money, I reckon poor old King Harold suffered the Carmen’s version of his death, a brutal end that would have been shocking even to battle-hardened medieval minds.

We don’t know where Harold is buried. Some say he was laid to rest on a cliff top near the battlefield looking out to sea, while others think he was interred at Waltham Abbey, which he had built and endowed. But wherever he lies, whichever location contains his mortal remains, that small pocket of our green and pleasant land also marks a sea change in English history: the death of Anglo Saxon England.

35 thoughts on “Medieval mysteries: One in the Eye for Harold?”